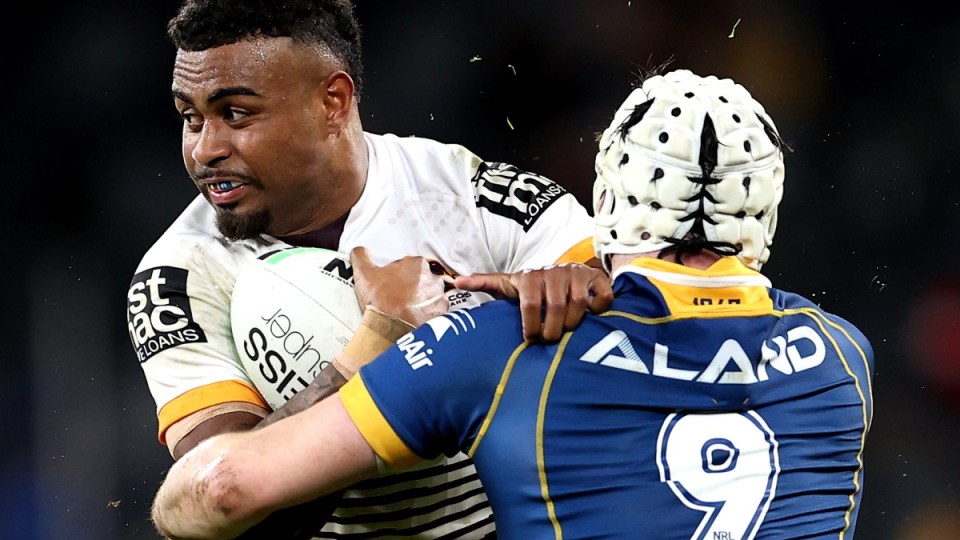 Ezra Mam is tackled by Reed Mahoney during the Broncos' big NRL win over the Eels. Photo: AAP

A top-four berth appears in reach for Brisbane, which capitalised on the return of several key players to thrash a disappointing Parramatta 36-14 at CommBank Stadium.

Thursday’s game was not the arm wrestle promised by its billing as an early taste of finals football.

But it did serve as confirmation that the Broncos’ rise from NRL easybeats to premiership contenders was finally complete.

As September approaches, the 2020 wooden spooners are into the top four and will finish the round there if out-of-form Melbourne loses on Saturday.

The Broncos face only two more current top-eight sides in the regular season, so their hopes of securing their first top-four finish since 2017 appear more realistic now than at any other point this year.

Parramatta’s draw will do them no favours as they too fight to clinch the all-important double chance.

In their remaining six games, the Eels face only one side that is not currently in the top eight and they take on reigning premiers Penrith next week.

The Eels crossed first through winger Maika Sivo as Brisbane struggled to adapt to the wet conditions early but when Adam Reynolds began to control territory with his boot, the Broncos worked their way back into the game.

Brisbane’s State of Origin prop Payne Haas made a destructive return from a shoulder injury, bursting through the line 20 minutes into the game to score his first try of the season.

As the Brisbane pack monstered its rivals, Haas posted a game-high 202 run metres and looks at short odds to make the Dally M Team Of The Year for a second season running.

The Broncos also welcomed Kurt Capewell, Patrick Carrigan and Corey Oates back from Origin duty, as well as Cory Paix and Corey Jensen from injury.

Oates had the Broncos’ first after he pounced on a series of kicks along the ground, and when Will Penisini was sin-binned for a professional foul, Capewell capitalised on the extra-man advantage on Brisbane’s left edge.

The second half began on an inauspicious note for the Eels.

The Eels enjoyed late chances but were denied by both their own sloppy handling and the steely defence of the Broncos, who claimed a crucial victory.

The win was Brisbane’s first at CommBank Stadium from four attempts and went some way to remedying their poor recent record against Parramatta.

The Broncos had lost six of their seven games against the Eels prior to Thursday.