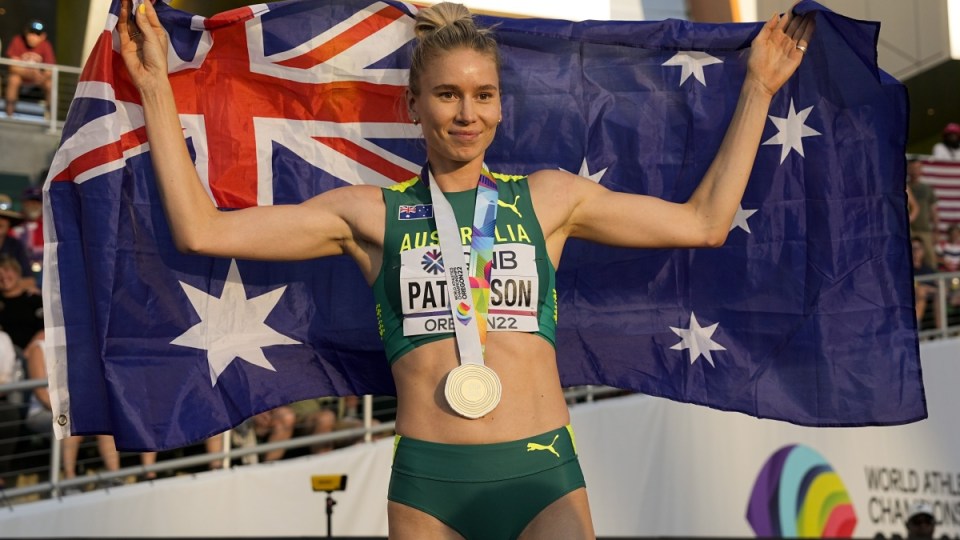 As with so many young athletes, Eleanor Patterson dreamed of becoming a world or Olympic champion.

But in the aftermath of her dramatic high jump world title in Eugene on Tuesday, US time, she reflected on how close that dream came to dying.

After claiming Commonwealth gold in Glasgow in 2014 as a shy teenager from the Victorian country town of Leongatha, Patterson struggled to cope with the resultant pressure and attention.

She left the Rio Olympics in tears after failing to qualify for the final and then walked away from the sport in 2018, seemingly for good, having missed out on selection for the Gold Coast Commonwealth Games.

The turning point came a year later when she moved to Sydney to link up with new coach Alex Stewart.

“It was starting from scratch.

“I was sitting on the couch and it was dead, gone.

“It was not until the last couple of months before joining Alex that I was able to say to myself ‘I think I’m not done. I know I have so much potential’.

“This year I’m starting to bring those things to fruition.”

Patterson readily admitted the comeback was far from straightforward.

“I was able to pull out some random performances but it hasn’t been until this year where it’s been such a pivotal moment of consistency.

“Even heading into this championships I had an injury coming in.”

Normally a picture of Zen-like calm, Patterson was much more outwardly emotional at Hayward Field on Tuesday, especially after a clutch third attempt at 1.98 metres that kept her alive in the competition.

She then powered over 2.00 metres at the second try and equalled the Australian record with a first-up clearance at 2.02 metres.

That proved to be the gold medal-winning jump after silver medallist Yaroslava Mahuchikh from Ukraine needed two cracks at 2.02 metres.

Even in the early years, Patterson knew she was capable of big things in her chosen sport.

“I knew I could clear big heights, I believed that I could be a high performer,” she said.