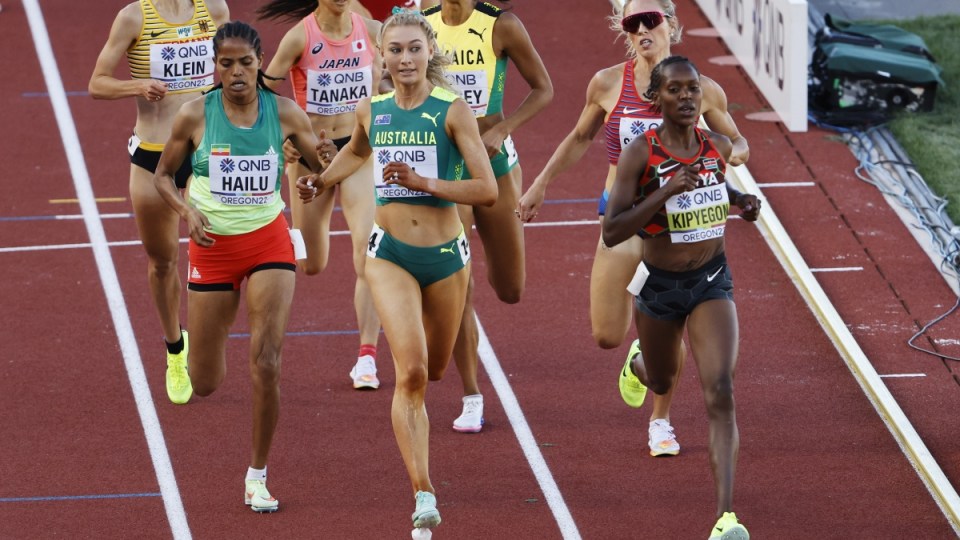 Jessica Hull cruises into the women's 1500m final at the world championships in Eugene. Photo: EPA

Looking every inch the major medal contender she now knows herself to be, Jessica Hull has cruised into the women’s 1500m final on a banner day for Australian middle-distance running at the world athletics championships.

And the former University of Oregon star gets the chance to challenge for that  spot on the podium on her beloved home track of Hayward Field.

Hull will be joined on the start-line on Monday (Tuesday AEST) by countrywoman Georgia Griffith, who fought her way through a rugged second semi to finish fourth.

The news was just as good in the opening round of the men’s 1500m with Olli Hoare and Stewart McSweyn both winning their heats.

It almost feels like Hull, who hails from Wollongong, is representing two countries – or at least one country and one sports-mad university town – such is her popularity in Eugene.

“It’s crazy, even the officials who are guiding us through the mixed zone, I know them all,” she said.

“One of them is my old teammate’s mum.

“It feels great and very calming.

“Yesterday I didn’t really let myself take note of all that and today I made a much better point of it, about this being home.

“Just taking note of the people around here who watched me grow from that little freshman to being an NCAA champion and who’s now here for the world championships.”

Day 2 at Hayward Field featured the Men's Long Jump final so we hunted down Field and Track expect and Olympic long jumper @Culbert_Report. A night so exciting, we even caught David talking about Track! https://t.co/CvfN4NJ1BZ#ThisIsAthletics @Mattlynch_

The 25-year-old looked composed throughout her semi, staying well clear of trouble at the front and crossing the line third in four minutes 1.81 seconds with plenty left in the tank.

“Now I just recover as best I can and give myself a real shot,” she said.

“That’s the big difference this year – that I have a shot.

“Previously I was hanging on and now it’s like ‘hey I can be a player in this game’.

“The training that I have banked in June has just been remarkable and I’m really excited to get to see that come to fruition.”

Griffith clocked 4:05.18 in the slower second semi to book a spot in her first major final, but Tokyo Olympics finalist Linden Hall was eliminated after running out of steam in the final lap.

In the opening round of the men’s metric mile, Tokyo Olympics finalists Hoare (3:36.17) and McSweyn (3:34.91) won the first two heats but Matthew Ramsden was run out ahead of the semis on Sunday.

“We could have four of us in the 1500 finals, which is pretty wild,” was Hull’s succinct summation.

Eleanor Patterson was flawless in the women’s high jump qualifying round, while Olympic silver medallist Nicola Olyslagers did it the hard way with a last-ditch clearance at 1.93 metres.

But the important thing was that the two gold medal contenders advanced safely to the final.

Bree Masters set a PB of 11.29 seconds in the opening round of the women’s 100 metres and Henry Frayne was last in the men’s long jump final with 7.80 metres.