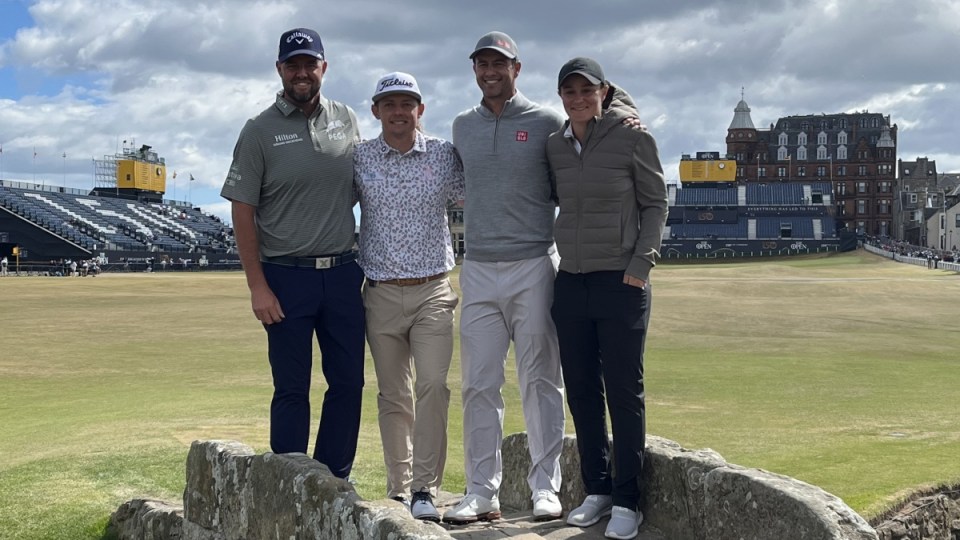 For the second day running Barty and her PGA golf trainee fiance Garry Kissick joined Smith to watch his final practice round before he leads the Aussie charge at the 150-year anniversary Open at the home of golf.

Fellow Australian big guns Adam Scott and Marc Leishman, who was runner-up in a play-off the last time the Open was held at St Andrews in 2015, also joined the group and posed for photos with Barty on the course’s iconic Swilcan Bridge.

Asked if Smith could become Australia’s first Open champion since Greg Norman at Royal St George’s in 1993, Barty beamed: “Of course he can”.

The retired Australian Open champion is more than an avid golfer, playing off a four handicap two years after winning the women’s A grade club championship at Brisbane’s Brookwater Golf Club while taking a break from tennis during COVID-19.

After competing in the Icon Series celebrity golf event in the United States, Barty made the flight across the Atlantic to support her fellow Queenslanders Smith and Scott before dashing off to watch the State of Origin decider at a nearby hotel.

Before she left, Barty also tipped to AAP a top-10 finish at least for Scott, who also hit the lead during the final round at St Andrews seven years ago.

Barty also enjoyed her own round at the home of golf on Sunday alongside retired English cricketer Kevin Pietersen, shooting an impressive six-over-par 78 off the men’s tees.

“She’s a good player, isn’t she. I think there’ll be some guys who’d be happy with six over,” Scott said.

“She’s on the celebrity golf tour these days.”

Barty said she plans on watching Smith’s opening round on Thursday before flying home to Australia on Friday.

Smith, who warmed up for the last major of the year with a top-10 finish at last week’s Scottish Open, will play alongside American superstar Brooks Koepka and Irishman Seamus Power for the first two rounds.