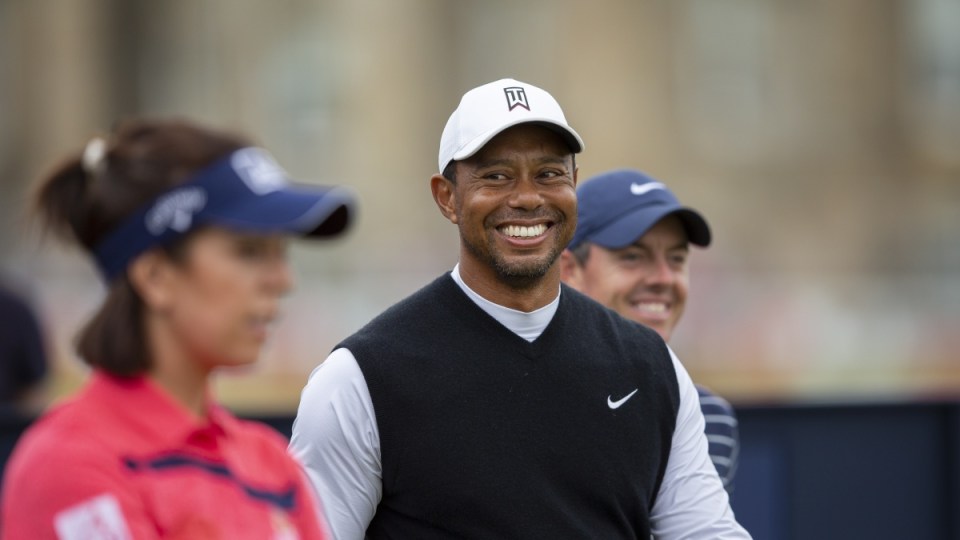 McIlroy suspects the extra firm and fast fairways at the baked out home of golf will prove a leveller, bringing the tour’s long bombers back to the field and also bringing the “Texas wedge into play”.

“It’s definitely a lot more of a strategic golf course when it plays like this,” the Open favourite said on Tuesday.

“Even like the drive I hit on the second hole yesterday – and that pin’s in the middle of the green – I felt like I couldn’t hit a chip shot that close, so I putted it from whatever, it was 60 yards.

“You’ll see a lot of that this week.

“You can bomb it around here and hit driver and get it close to the greens, but that doesn’t necessarily mean you’re going to make birdies from those positions.”

The Old Course has some 112 bunkers but Woods famously avoided every one during his amazing win at St Andrews in 2000.

Now 46 and hobbling around in pain as he continues his recovery from career-saving surgery after almost losing a leg in his LA car crash in February 2021, Woods faded over the weekend to finish 47th at this year’s Masters before withdrawing from the PGA Championship in May.

But McIlroy says don’t rule out the living legend from contending for a fourth Claret Jug and 16th career major.

“The way the golf course is and the way the conditions are, I could certainly see it,” McIlroy said.

“It’s going to be a game of chess this week, and no one’s been better at playing that sort of chess game on a golf course than Tiger over the last 20 years.”

“He was moving better than I’d seen him move in a while,” he said.

“Hitting the golf ball and swinging the club aren’t the issue. It’s the walking part of it that’s the struggle.

“But he seemed to be moving well so that’s encouraging.”

McIlroy, though, is the bookmakers’ top fancy after an impressive season highlighted by five top-10s since the Masters and victory at the Canadian Open.

“My confidence in my game is as high as it’s been in quite a while,” said Northern Ireland’s four-time major champion.

“I can’t go in here thinking that this might be my time. I’ve got to string four good rounds together and, hopefully at the end of the week, that’s good enough to win.

“I just can’t get ahead of myself.”

McIlroy disagreed, though, with Jack Nicklaus’s assertion a golfer’s career wouldn’t be complete without winning an Open at St Andrews.

“But I think it’s the holy grail of our sport,” McIlroy said.

“There’s a lot of great players that have won Opens and maybe not had won Opens at St Andrews, so I think it’s unfair to say that a golfer’s career isn’t complete without that.

“But it’s certainly up there with one of the greatest things you can do in our game.”