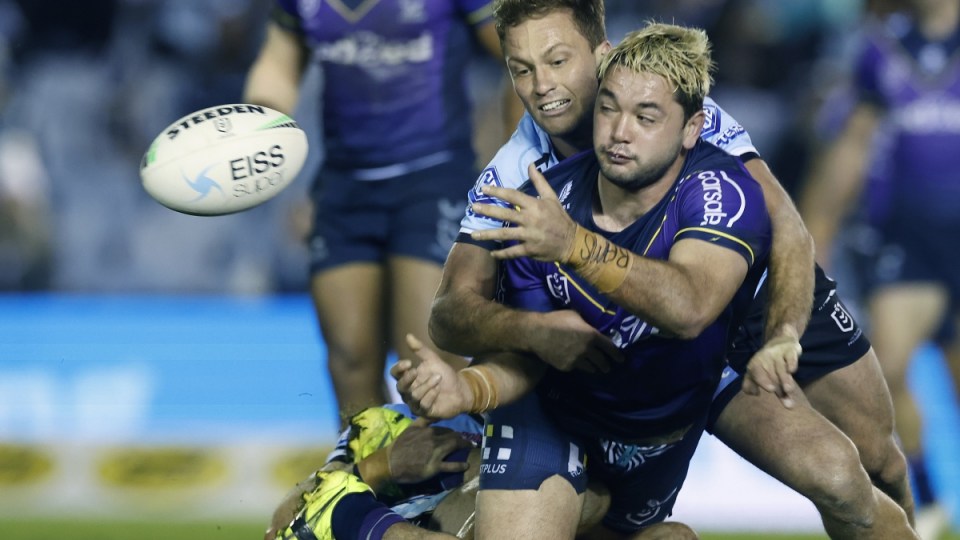 Brandon Smith will miss Melbourne’s next three games after being referred directly to the NRL judiciary for referee dissent.

The Storm hooker called referee Adam Gee a “cheating bas—d” during Storm’s 28-6 loss to Cronulla and was sent to the sin bin.

Smith took issue with Gee’s decision not to award his side a set restart midway through the second half after maintaining Cronulla’s Aiden Tolman had made a second effort in a tackle.

A contrite and forlorn Smith appeared before the NRL judiciary via video link on Tuesday night.

That's a costly outburst from Smithy. 😬

“In the heat of the moment I was extremely frustrated and I took it out on the wrong person,” Smith said.

“I said things that should never be said to an official.

“I am genuinely sorry to the game and to the referee.”

Prior to the hearing, Gee told the NRL he had heard Smith call him both a “f—ing cheating p—k” and a “cheating bast–d”.

However, Smith said Gee had misheard and that he had actually said “f— me” in self-admonishment.

Lachlan Gyles SC, counsel for the NRL, did not dispute Smith’s version of events but said suggesting the referee had cheated carried “serious connotations” about the NRL’s integrity.

Gyles suggested a suspension of at least four weeks, pointing to Smith’s status as a senior player with significant popularity among impressionable young fans.

He said as the premier rugby league competition in the world, the NRL needed to set a higher standard of player behaviour than any other competition and implored the judiciary to impose a suspension that would deter players from committing similar offences.

Representing Smith, Nicolaous Ghabar said a suspension of four weeks or more would not account for Smith’s early guilty plea nor his contrition.

Mr Ghabar said Smith’s decision to enter an early guilty plea, to immediately leave the field rather than argue with Gee and to apologise afterwards all showed remorse.

Mr Ghabar submitted a character reference from New Zealand coach Michael Maguire, who said Smith was “an exceptionally passionate and committed player” but one who “has always shown he is very respectful of authority and match officials”.

In his reference, Maguire said he found Smith’s comment to have been “out of character”.

“Offending of this nature has a potentially adverse effect on young players who seek to emulate those playing the NRL competition …and an adverse effect on those who might aspire to become match officials,” Justice Bellew said.

However, the judiciary was satisfied Smith had been genuinely remorseful for his actions, which influenced their decision to impose a sanction less severe than that suggested by the NRL’s counsel.

Melbourne has lost its past two games so is now only two points clear of fifth-placed Brisbane and will be without Smith for clashes against Canberra, South Sydney and the Warriors.

Harry Grant is set to start at hooker in Smith’s absence against the Raiders on Sunday, provided he can make it through Wednesday’s State of Origin decider unscathed.

Josh King has been named at lock, Smith’s other position of choice.