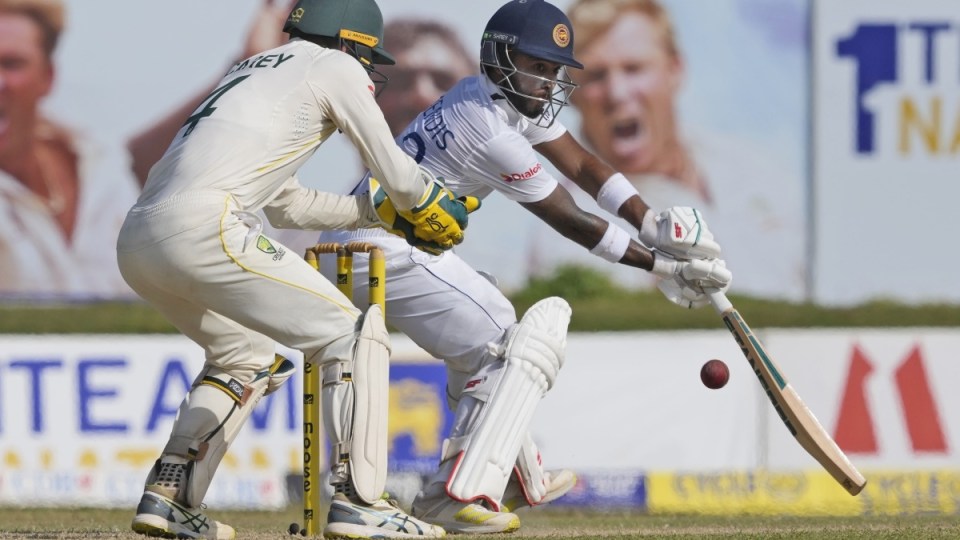 Kusal Mendis was the only wicket before lunch as Sri Lanka fought back in the second Test on Sunday. Photo: AP

Australia must overturn 40 years of Test history in Sri Lanka to claim a 2-0 series win after DRS woes left it on the back foot in the second Test at Galle.

Sri Lanka went to stumps at 6-431 on day three in reply to Australia’s 364, already leading by 67 runs on the first innings.

It came on the back of a fine 118no from Dinesh Chandimal, while Angelo Mathews and debutant Kamindu Mendis joined Dimuth Karunaratne and Kusal Mendis in hitting first-innings half-centuries.

With two days to play, the odds are already firmly stacked against Australia.

Teams from outside Asia have won just once when giving up a first-innings lead in Sri Lanka, having gone on to lose or draw on all 28 other occasions.

And none have mounted a comeback with the deficit Australia is already facing.

Sri Lanka’s 149-over effort has come after it lost all 20 wickets in just 81.5 overs in the first Test, heavily beaten by Australia in little more than two days.

But this is a far different wicket, devoid of the demons that caused prodigious turn in the series opener.

Australia’s quicks have also been unable to generate any reverse swing, with the lush wicket square and outfield helping preserve the ball.

There is still hope the wicket could deteriorate by day five, despite showing no serious signs of wear so far.

But even if that is the case, it is likely it will now be Australia fighting for a draw rather than trying to force a result.

The tourists have also only made life harder for themselves after running out of reviews in Sunday’s first session.

Chandimal should have been out on 31 when he edged a cut off Mitchell Starc, but Australia had no option to refer the on-field call of not out.

Veteran Mathews was also lucky to survive an lbw shout off Nathan Lyon that would have been out on review, only to fall at bat pad off Starc (2-47) in the next over for 52.

Alex Carey also missed three chances behind the stumps, one an extremely difficult stumping prospect when Chandimal danced down the wicket to Lyon on 10.

The ball spun sharply from outside off and beat batsman and keeper on the way to fine leg.

Carey’s other big chance for a stumping off Lyon, however, should have been taken when Kamindu Mendis was on 43, before the debutant was eventually bowled by Mitchell Swepson (2-90) out of the footmarks for 61.

The missed chances marked a tough day for Lyon, who finished with Niroshan Dickwella’s wicket while battling cramps during his 56 overs for 2-160.

The off-spinner had started the day by trapping Kusal Mendis lbw in the third over for 85, at which point it looked like Australia could expose the lower order and attain a first-innings lead.

But Chandimal got off the mark by going inside out and driving Lyon for four and six in consecutive balls, setting the tone for a clinic in playing down the ground.