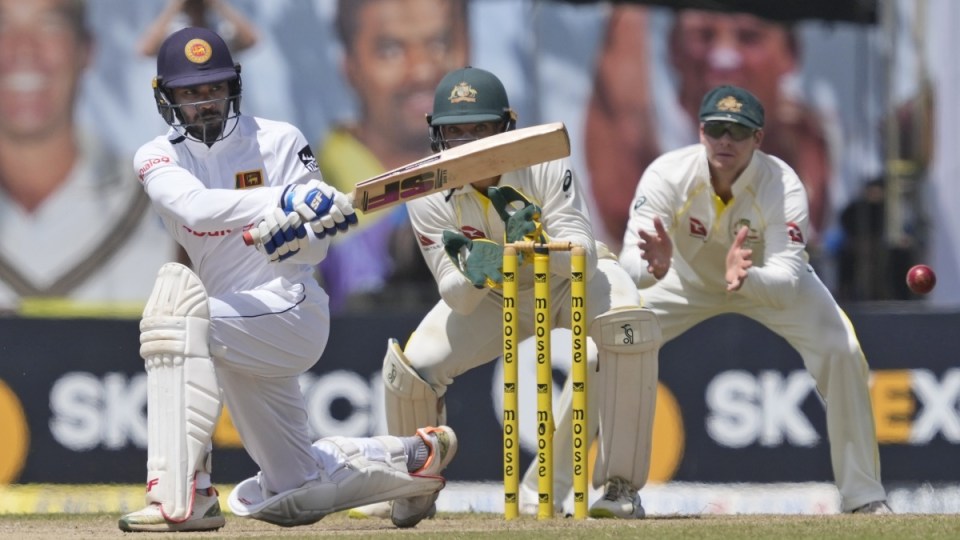 Dhananjaya de Silva is one of the Sri Lankans ruled out of the second Test with COVID-19. Photo: AP

Sri Lanka admits its preparations are in chaos on the eve of the second Test against Australia amid fears the COVID-19 outbreak in its squad will grow beyond five cases.

Three players tested positive to the virus on Wednesday alone, with all-rounder Dhananjaya de Silva, quick Asitha Fernando and leg-spinner Jeffrey Vandersay all ruled out of the Test in Galle starting on Friday.

It comes after Angelo Mathews missed part of the first Test with the virus, though he has since returned, while back-up spinner Praveen Jayawickrama is also out.

The hosts were awaiting the results of further tests on Thursday, concerned even more players could be ruled out.

“We were planning for the match two days earlier, but it’s not easy when you are not able to finalise a proper XI.

“It’s not easy as captain.

“But you can’t help it right now. At the moment we have to go through the medical protocol and see how it goes.”

Australia is staying in the same hotel as the Sri Lanka team, but is on a different floor and keeping its distance, having avoided any cases of COVID all tour.

Andrew McDonald’s men had their last round of daily out-of-match checks on Thursday and each came back negative, meaning they will be able to field their best XI.

Players will only now be tested if they have symptoms in the match, as part of the COVID policy for the series.

But Sri Lanka has had no such luck.

Karunaratne has confirmed mystery spinner Maheesh Theekshana will debut, after troubling Australia in the white-ball series with his ability to spin the balls both ways.

“It just depends because we have (more) rapid antigen tests,” Karunaratne said.

“Hopefully (Theekshana) will play and he will do a nice job for me. He is a good bowler.

“We see him giving trouble to the left-handers and the right handers in one-days.

“Hopefully he does the same thing. Just want him to the same what he did in the ODIs, keep it simple.”

Prabath Jayasuriya has also been flagged as a chance to debut in Galle as a left-arm spinner, as is teenage star Dunith Wellalage.

Left-arm wrist-spinner Lakshan Sandakan also remains another option for the hosts after being drafted in, with chief spinner Lasith Embuldeniya axed after the first Test.

There also remain questions over whether Sri Lanka will play a quick, with Kasun Rajitha the most likely in its squad.

But as of Thursday, the hosts were finding it hard to finalise any real plans with such uncertainty on match eve after being flogged by 10 wickets in the first Test.