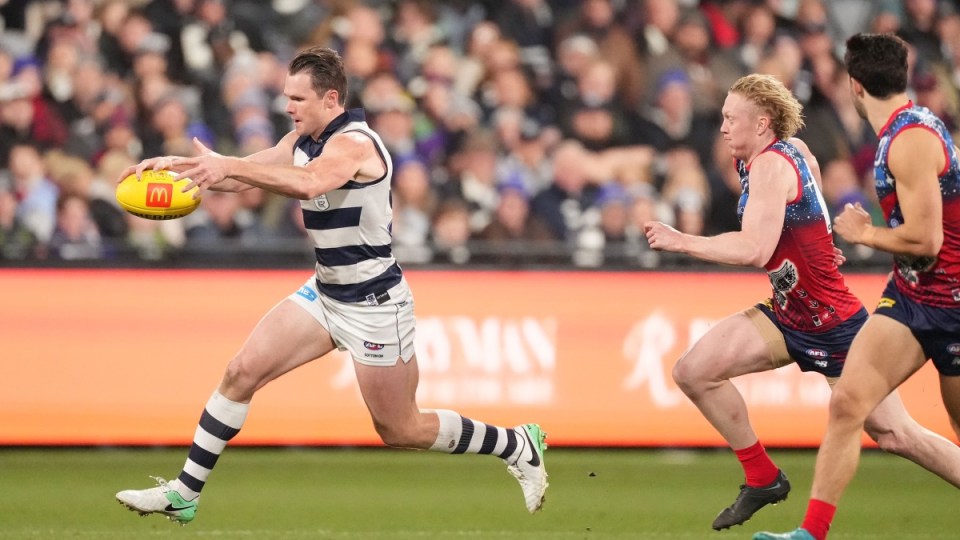 Huge midfield displays from Tom Atkins, Patrick Dangerfield and Cam Guthrie have helped Geelong throw another twist into the AFL premiership race with an emphatic 28-point victory over Melbourne.

The Cats prevailed 12.19 (91) to 9.9 (63) at a sold-out GMHBA Stadium on Thursday night, extending their winning streak to seven matches.

The result meant Geelong drew level with the reigning premiers on 12 wins and moved into top spot on the ladder with a superior percentage.

The Demons, who looked to have arrested their mid-season slump over the previous fortnight, have lost four of their last six matches.

Dangerfield amassed 31 disposals and nine clearances but wasted chances in front of goal, finishing with 0.4 to his name.

He had a major influence around the contest as Geelong dominated clearances 54-36 in a battle between two of the competition’s best midfield units.

Melbourne, which trailed by as much as 23 points during the third quarter and 20 in the last, got back within a kick midway through the final term.

But Guthrie’s goal from a stoppage and a long bomb from Duncan got the Cats home.

There were four lead changes in a high-intensity first quarter as the contest took on a finals-like feel from the outset.

Demons duo Petracca and Brown slotted brilliant goals in open play but Guthrie’s bending snap from the boundary line topped them both.

Poor decisions and execution on forward entries cost both sides chances to break the arm wrestle in the second term as Geelong maintained their narrow lead, taking a four-point advantage to the main break.

Dangerfield had 18 first-half disposals but was wasteful in front of goal, booting 0.3, including a long set shot after the half-time siren.

The Cats dominated the third term and put a 23-point gap on their opponents by kicking the first three goals of the second half.

The run included a trademark 50-metre bomb from former Hawthorn wingman Isaac Smith in his 250th game before two quick Melbourne goals cut the deficit to 12 points at the last change.

Hawkins kicked the first of the final term, but there were some nervous moments for the Cats when Kysaiah Pickett and Petracca lifted Melbourne off the canvas.

But Geelong kicked the final three goals of the contest to seal a result that marked a 111-point turnaround from the two sides’ previous meeting, in last year’s preliminary final.