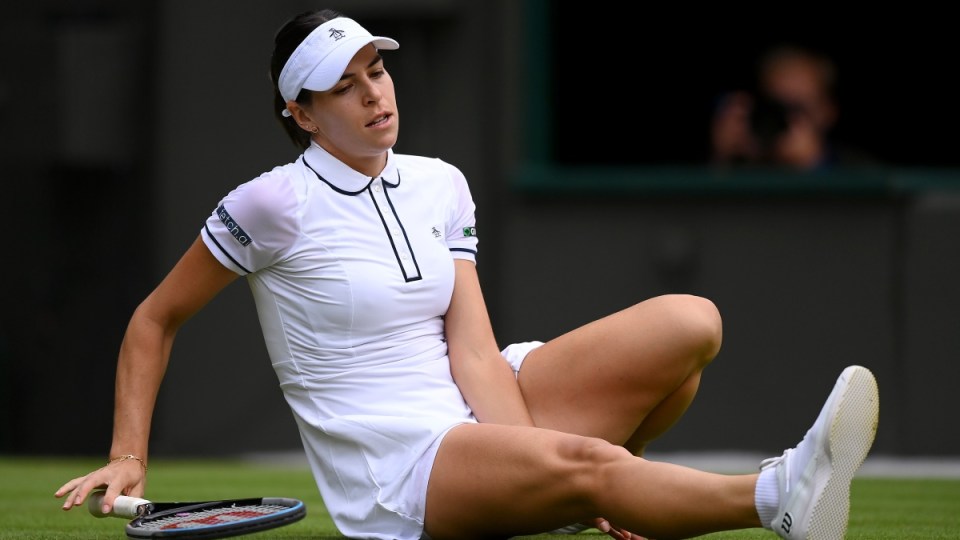 Australia's Ajla Tomljanovic has fallen short of a place in the Wimbledon semi-finals. Photo: Getty

Tomljanovic took the opening set to raise the prospect of an extraordinary 51-year Australian tennis first before bowing out 4-6 6-2 6-3 on Wednesday.

Rybakina is the tournament’s ace leader, boasts the second-fastest serve of the 2022 championships and ultimately overpowered Tomljanovic on show court No.1.

But not before Tomljanovic put up an almighty fight.

Rybakina books her place in the semi-final with a 4-6, 6-2, 6-3 win over Ajla Tomljanovic#Wimbledon pic.twitter.com/OZTdZPlYNx

The 29-year-old played one of the sets of her life to threaten a boilover early on.

Defying her underdog status, Tomljanovic’s fearless groundstrokes and relentless retrieving – including one incredible running topspin lob winner from behind the baseline – earned the world No.44 the first set.

Already the first Australian since Jelena Dokic in 1999 and 2000 to make the quarter-finals, Tomljanovic suddenly looked a chance to deliver the most spectacular and unlikely of encores to Ash Barty’s march to the title last year.

Legends Margaret Court and Evonne Goolagong Cawley in 1970 and 1971 are the only Australians to win the Wimbledon singles in consecutive years.

On form and into a first ever Grand Slam semi-final – Elena Rybakina ✨#Wimbledon pic.twitter.com/EQOEz6bWwE

Alas, after losing to Barty in the quarters last year, Tomljanovic again fell at the same stage as Rybakina stepped up with an other 15 aces to dominate the second and third sets.

Rybakina at one stage reeled off seve games in a row from 2-2 in the second set to 3-0 in the third to turn around the quarter-final.

Despite Tomljanovic gamely breaking back for 2-5 in the deciding set, the reprieve merely proved a stay of execution as Rybakina eventually closed out the match after one hour and 51 minutes.

The 23-year-old’s victory set up a semi-final date on Thursday with resurgent 2019 Wimbledon champion Simona Halep.

Gallant Ajla Tomljanovic bows out of Wimbledon in quarter-final