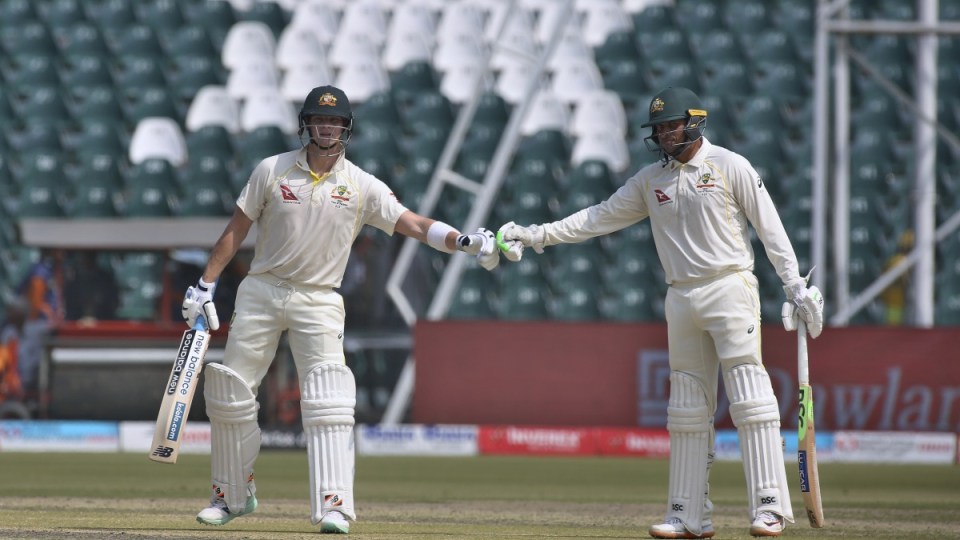 Steve Smith says he and Usman Khawaja have long moved on from their first Test mix-up. Photo: AP

Steve Smith insists there is no lingering fallout from his mid-wicket mix-up with Usman Khawaja after his fiery first Test dismissal against Sri Lanka.

Smith created headlines last week when he gestured back at Khawaja and stormed off the field after being run out for six in Galle.

The incident drew criticism back home in Australia, including from former captains Mark Taylor and Ian Chappell.

Chappell in particular was harsh on the right-hander, claiming he should have been in better check of his emotions as a vice-captain on the field.

But Smith insisted he and Khawaja had immediately moved on, and he was more frustrated at his dismissal.

“I hate getting run out. I think anyone does,” Smith said when asked if he had reflected on the situation.

“Particularly given the (tough) conditions and gifting them a wicket. As one of the most experienced players I was pretty upset.

“That happens in the game. I got over it pretty quickly. I had to keep moving forward and that is part of the game.

“I spoke to Uz straight after and he was pretty chilled. Mix-ups happen. We keep moving on.”

What Smith is desperate for is more time in the middle.

He missed the final three one-day internationals in Sri Lanka with a quad injury and only faced 11 balls in his one innings in Galle before his run out.

Smith employs a different approach to most Australians against the spinners, only using the sweep when the ball spins back into him.

He was Australia’s leading runscorer on the last tour of Sri Lanka, relying on a fast-feet method to try and unsettle the bowlers.

“I’m not a huge sweeper so I prefer to run down the wicket and get them off their lengths that way or come back into my crease,” Smith said.

“Really it’s about not getting stuck on the crease with the ball spinning into me.

“If I’m doing that well and fast on my feet, I usually feel pretty good.”

Australia expects the wicket to spin just as much in the second Test in Galle starting on Friday, with Sri Lanka adding more spinners to its squad.

Smith had attempted to lead a more positive team with the bat when he captained Australia’s 3-0 loss in 2016, only for the side to be tentative in defeat.

But that approach has been put into far better effect on this tour, as Australia scored at a rapid rate in the first Test.

“It’s about having courage in the way guys are playing,” Smith said.

“It’s good we all play a little bit differently.

“There’s not the same continuity, so bowlers have to change their lengths a bit and when they’re doing that in a partnership you can cruise along quite freely.”