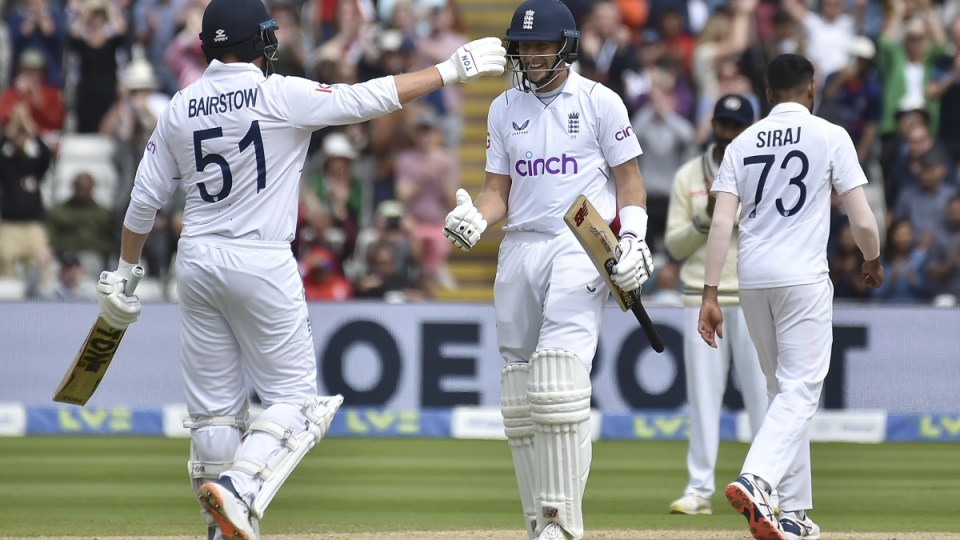 England rode unbeaten hundreds by Joe Root and Jonny Bairstow to pull off its highest successful Test chase, coasting to a series-levelling seven-wicket victory in the rearranged fifth match against India at Edgbaston.

Chasing 378 for victory, England went into the final day needing 119 runs with seven wickets in hand.

Root went on to smash a masterly 142 not out, his 28th Test century, forging a mammoth 269-run partnership for the unbroken fourth wicket with Bairstow.

Root’s elegant hundred was studded with 19 boundaries and a six.

Bairstow’s unbeaten 114 was his second hundred of the match as England triumphed with two sessions to spare.

England’s previous highest successful run chase came in 2019 when it reached a 359-run target in an Ashes Test against Australia on the back of Ben Stokes’s brilliant unbeaten century.

“We are trying to rewrite how Test cricket is being played, in England in particular,” captain Stokes said of their new aggressive approach.

“We know that we want to give new life to Test cricket, and the support that we’ve had has been incredible. We are bringing a new set of fans to Test cricket. We want to leave a mark.”

Root and Bairstow showed the kind of sustained aggression that is quickly becoming the hallmark of this England Test team since Brendon McCullum took over as the head coach and Stokes the captaincy.

Root, however, also hailed the efforts of openers Alex Lees and Zak Crawley, who put on 107 for the first wicket to lay the foundations for the win.

“So much credit has to go to the two lads at the top,” Root said.

“The way they set the platform, the way they shifted pressure straight back on to India and smashed that new ball around on a wicket that was doing a bit was incredible batting.

“It really made the work that we had to do after that a lot easier, and they deserve a huge amount of credit because it was a sublime partnership against a world-class attack.”

India skipper Jasprit Bumrah admitted his side had allowed England back into the game with their batting in the third innings of the match.

He told Sky Sports: “This is the beauty of Test cricket, isn’t it? Even if you have three good days. But you have to keep coming and keeping up the good performances.

“Yesterday we fell short with the bat and we had to come back quickly with the ball. That is the place where we let the opposition in, and then the momentum just kept shifting away from us.”

🗣️ "This is the beauty of Test cricket."

Player of the Series Jasprit Bumrah discusses where he thinks it slipped away… pic.twitter.com/2GOlCJkpNh

The five-match series against India could not be completed last year following COVID-19 cases in the India camp ahead of the final match at Old Trafford.

The only negative for England was an accusation that Indian supporters had been racially abused on Monday. An investigation is under way, with police involvement.

Warwickshire chief executive Stuart Cain apologised on Tuesday for “distress” caused and said anyone found guilty of abuse would be banned from Edgbaston by Warwickshire, and from other cricket venues nationwide by the England and Wales Cricket Board.

Videos of the week: Last-minute rescue, a death-defying slide and some playful pets
Australians Kyrgios and Tomljanovic advance at Wimbledon
Today's Stories