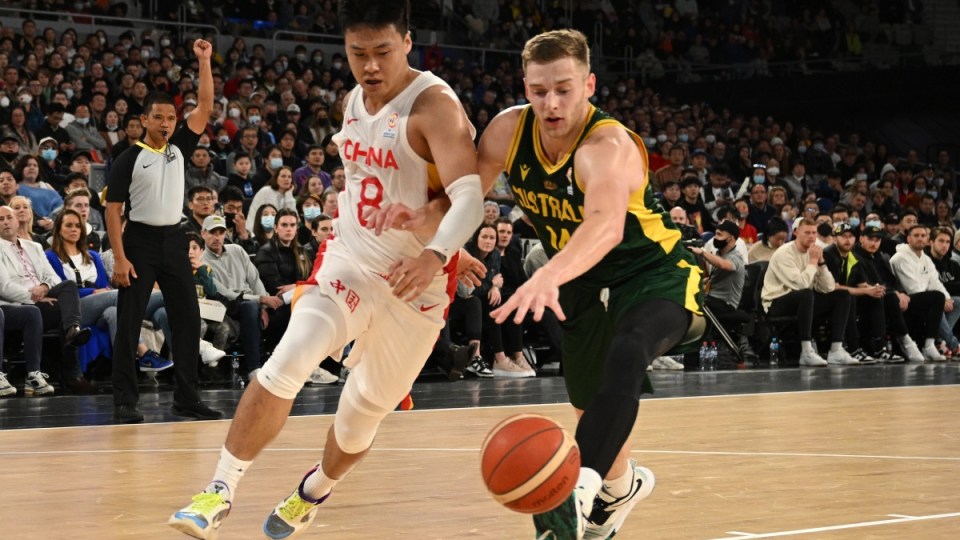 Jack White was in superb form for the Boomers in Sunday's World Cup qualifier win against China. Photo: AAP

A barnstorming final-quarter blitz has helped the Australian Boomers defeat China 71-48 to complete a six-game unbeaten run through the opening round of FIBA World Cup qualifiers.

With the scores level after a hard-fought battle over three quarters at John Cain Arena, the Boomers crushed the visitors 26-3 in the final term to secure top spot of Asian Group B and boost their chances of taking part in next year’s World Cup.

Australia stole the momentum thanks to a 12-0 start to the fourth quarter as China’s offence stalled, coach Brian Goorjian crediting his side’s defensive effort over the whole match as they covered the loss of shooters Jack McVeigh and Clint Steindl to shoulder injuries following Friday’s win over Japan.

“I was worried about how we were going to put points on the board and what ended up happening … our defence was better,” Goorjian said after holding China to one made basket and a free throw over the final 10 minutes of play.

“We stayed in the game through our defence and then the game loosened up when we started hitting some shots from the perimeter.”

Melbourne United forward Jack White nailed three triples in the fourth quarter to lead the way for Australia with an impressive 16-point, 14-rebound double-double, while captain Matthew Dellavedova and Thon Maker each added 13.

“It’s just been such an awesome experience being able to represent my country, alongside the whole group and staff and to do it in Melbourne, on home soil has been, you know, just an absolute honour,” White said after the match,

The 24-year-old Victorian delayed his trip to join Denver Nuggets for the NBA’s Vegas Summer League, opting to represent the Boomers before heading off to the States in time for the July 7 tip-off.

A 14-0 start to the fourth quarter breaks the game wide open for Australia! 🇦🇺

Both teams had already secured their spots in the second round of qualifiers, due to start in August, but with every result carrying over to the next stage, the match was played at high intensity and with plenty of feeling.

China was seeking revenge for Thursday night’s loss to Australia and upped the physicality at the defensive end, Dellavedova receiving extra attention following his match-winning turn in their opening encounter.

The Boomers paid the price for a sluggish start to the second quarter, a run of 10 straight missed shots allowing the visitors to build a seven-point lead, before a late burst from Maker handed Australia a 30-29 edge at half-time.

China threatened to pull away from the Boomers on a couple of occasions in the third term, but William McDowell-White and Dellavedova stepped up with critical baskets to level the scores at 45-45 heading into the final quarter.