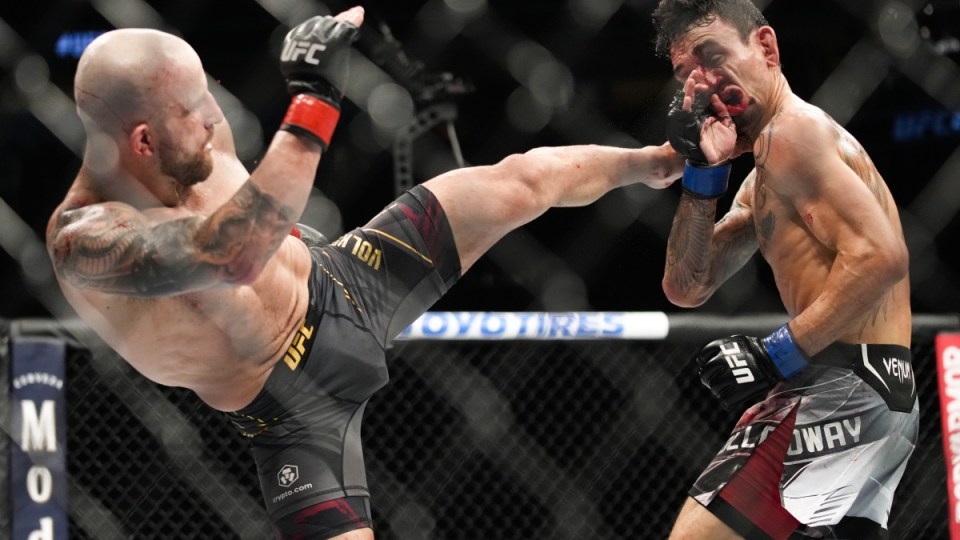 Australia’s UFC featherweight world champion Alexander “The Great” Volkanovski has lived up to his name with a dominant points win and third victory over former title holder Max Holloway in UFC 276 in Las Vegas.

Volkanovski, from the New South Wales south coast town of Windang, dominated with his fists, punishing Holloway with left jabs and right hand blows, opening up a cut above the Hawaiian’s left eyebrow in the second round.

While the first two fights were close, 33-year-old Volkanovski dominated their third encounter with his fast hands, winning every round on all three judges’ scorecards.

The No.2-ranked pound-for-pound fighter in the UFC, Volkanovski has won 22 fights in a row since his only MMA loss in 2013.

The hand speed advantage of the 33-year-old champion was apparent from the outset after a cagey first couple of minutes when both men threw a lot of feints.

“Too fast for you,” Volkanovski told the challenger in the octagon.

Volkanovski relied primarily on hand strikes, occasionally throwing in some kicks and the odd elbow.

Holloway had some success with his kicks but landed few meaningful punches as Volkanovski displayed good head and feet movement.

The 30-year-old challenger had radiated intensity and spoke aggressively in the lead up to the fight, but couldn’t find a way to trouble Volkanovski.

“That intensity that we both had, the last few days I needed it. I really needed it.”

Volkanovski doesn’t get enough credit. One of the toughest, most explosive fighters in the midst of his Prime. What a performance #UFC276

The Australian’s masterclass had the commentators purring with former UFC heavyweight and light heavyweight champion Daniel Cormier saying “I’m in awe at his improvements”.

Volkanovski has now made four defences of the title he took off Holloway in 2019.

After his previous defence he suggested he would look at moving up to lightweight and reiterated that after his latest victory.

“I want to be busy. I don’t think this division itself can keep me busy,” Volkanovski said.

“I want to move up and go for double champion, I’ll keep two divisions busy.

“I’d love to get that double champ status and if I get both belts I’ll keep them both busy.”