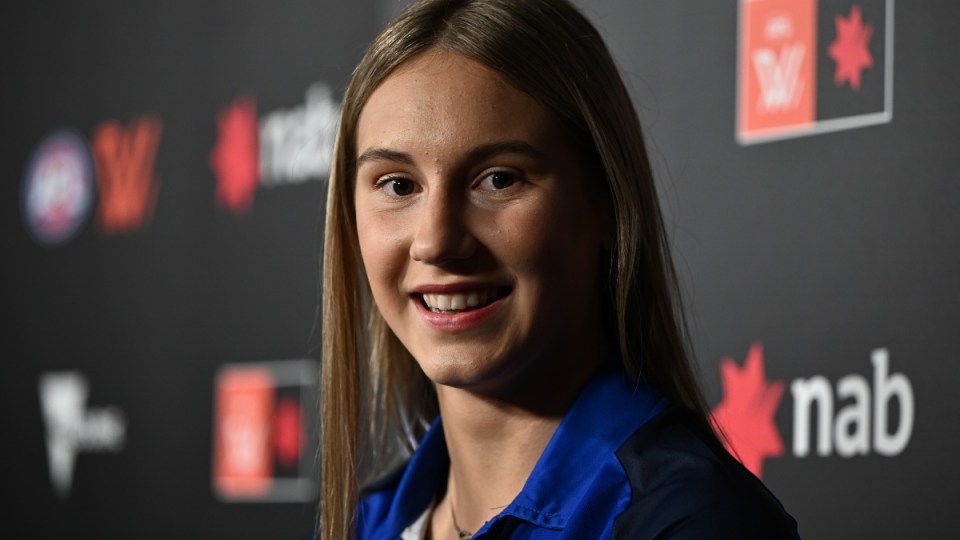 Midfielder Montana Ham was chosen as the AFLW's No.1 draft pick by Sydney on Wednesday. Photo: AAP

AFLW No.1 draft pick Montana Ham has paid tribute to her late father after the gun Victorian opted to depart her home state in favour of joining new club Sydney.

Midfielder Ham nominated for the NSW draft pool, citing lifestyle and future career reasons and the Swans didn’t hesitate to select Ham as their first draft pick at Marvel Stadium on Wednesday night.

Ham’s father Roy died seven years ago and the 18-year-old reflected fondly on his influence.

“He would be over the moon and super proud. I can see him out in the crowd and see his face (in my mind) – he’d be lighting up,” she told reporters.

“He was a huge influence when it came to my footy. He taught me everything.

“The basis of footy was always there for me whenever I needed.

“Whenever I was down, when I was up, he was basically my number one supporter. I know that he’d be looking over me, super proud.

“To do it for him is something that I’m really grateful.

“He’d be alright with the Swans – he’d just be more happy that my dream has come true.”

Ham will juggle year 12 in Melbourne with trips to Sydney for training ahead of the August season start.

“They came to my club like every other team,” she said.

“For me, it was more of a life decision. I really saw myself being up there for 10 years and somewhere I could live for a while.”

“I had a little inkling. One of the people let me know that there was a possibility,” Fleming said.

“I kept it really quiet and didn’t tell the family, so it was nice to see their reaction.”

Port Adelaide snapped up top South Australian Hannah Ewing with pick No.3, while Essendon opted for midfielder/forward Amber Riley at pick No.4.

West Coast picked standout West Australian Ella Roberts at pick No.14 then went for ruck Lauren Wakfer with pick No.15 despite a recent knee reconstruction.

The most heartwarming moment of the night came at pick No.34 when West Coast selected Wakfer’s identical twin, Zoe Wakfer.

There were other family connections.

Sydney selects Montana Ham as No.1 pick in AFLW draft