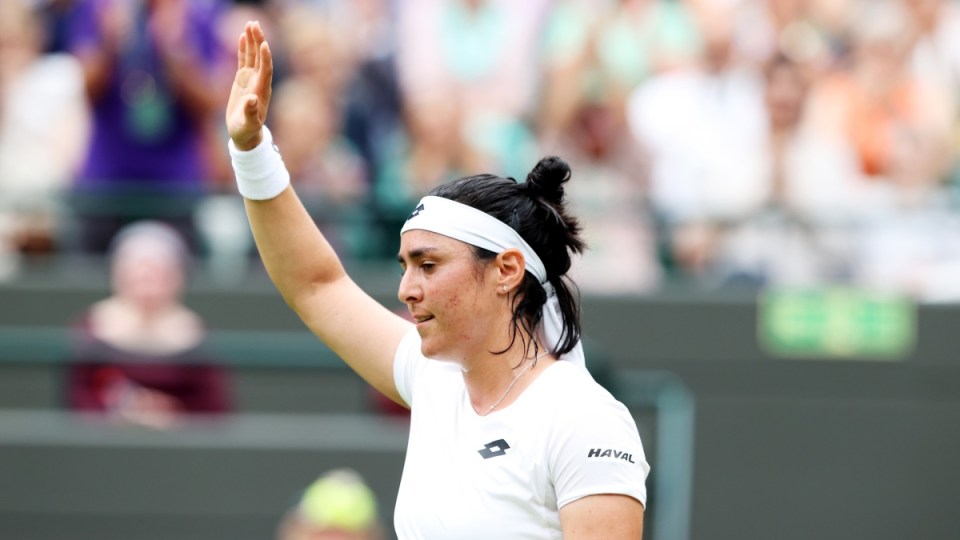 Third seed Ons Jabeur was the first big name through to the Wimbledon second round. Photo: EPA

Tunisian third seed Ons Jabeur has proven far too strong for Swedish qualifier Mirjam Bjorklund to be the first big gun through to the second round of Wimbledon with a 6-1 6-3 victory.

After reaching a career-high ranking of second, 2021 quarter-finalist Jabeur served strongly and dominated from the baseline against the 125th-ranked Bjorklund, who made her debut at the grass-court grand slam this year.

Jabeur arrived in London having lifted a grass-court title in Berlin two weeks back and was in an attacking mood in her first career meeting with the 23-year-old Swede on a cloudy day on Court One.

The Tunisian broke Bjorklund’s serve three times to take the opening set and a single break was enough in the second for Jabeur to seal victory in 53 minutes.

Jabeur converted her first match point when Bjorklund sent a backhand long and she will next meet Canadian Rebecca Marino or qualifier Katarzyna Kawa of Poland for a place in the third round.

Home hope Emma Raducanu will take her place as one of the headline acts later on Monday.

The idea of one British grand slam champion featuring on the Centre Court bill would have been unthinkable a couple of decades ago.

“I think that’s a pretty cool line-up,” said Raducanu, who will be making her Centre Court bow.

“Just to be included amongst those names is special in itself. I never would have thought that. I’m obviously looking forward to getting out there.”

Whether Raducanu can hope to match last year’s run to the fourth round, or even push towards echoing her remarkable US Open triumph, will become clearer when she begins her match against dangerous Belgian Alison Van Uytvanck.

Raducanu has declared herself fit and ready to go, and there will certainly be no hiding place if the side strain she suffered in Nottingham three weeks ago is still niggling.

They have met once before, at a second-tier tournament in Chicago last summer, when Van Uytvanck was the top seed and Raducanu still a promising up-and-comer.

Welcome to The Championships 2022 ✨

Join us on Wimbledon Uncovered for what promises to be a cracking Day One 👇#Wimbledon | #CentreCourt100 https://t.co/eqMAIowyin

The British No.1 won that one but Van Uytvanck is a proven performer on grass having reached the fourth round at Wimbledon in 2018, while she won a warm-up tournament in Italy last weekend.

Raducanu, who has managed just seven competitive games on grass this season, said: “I definitely feel like game-wise I back myself pretty much against anyone. I feel if I really put my mind to it and commit then I can be pretty good. So I’m definitely looking forward to the match.

“But she’s a really tricky opponent, especially on grass courts. I think this surface definitely suits her well. She plays a pretty quick, high-tempo game. It’s definitely going to take some getting used to, being prepared for that straightaway.

“It’s definitely going to be a tough match-up, but every match is at this level. I’m still ready to go.”

Raducanu and Murray are among nine British players competing on Monday.

World No.2 Anett Kontaveit is also in action against American Bernarda Pera.

Tunisia’s Ons Jabeur cruises into second round at Wimbledon