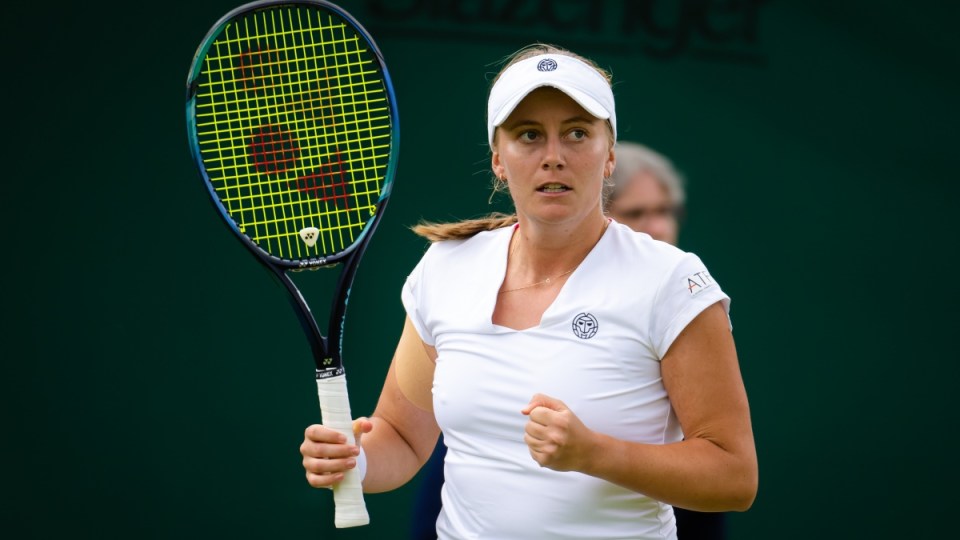 Daria Saville has bombed out of Wimbledon, the Australian No.2 unable to parlay her wildcard entry into another grand slam run.

Saville exited with a 7-5 3-6 7-5 first-round loss to Bulgaria’s Viktoriya Tomova on Tuesday.

The 29-year-old had successfully pleaded with All England Club officials to hand her the last of seven wildcards into the women’s main draw following a form resurgence in 2022 after finally overcoming a chronic foot injury.

Not to be for Daria Saville. The Aussie has gone down in an incredibly tight first round clash at #Wimbledon. #TheFirstServe pic.twitter.com/naK51szOpp

She did put up a stand, though, refusing to throw in the towel after jarring her right knee in the sixth game of the deciding set and falling 5-2 behind.

But after clawing back to 5-5, Saville again dropped serve to stay in the set – as she did in the first set – to hand Tomova victory.

On the comeback trail following a lengthy battle with debilitating Postural Orthostatic Tachycardia Syndrome, Hives earned her way into the main draw with three qualifying wins at Roehampton.

True to her character, Hives also put up up a fight, staging a mini comeback from 5-2 down in the second set to extend Monday’s match.

But she eventually succumbed to the world No.5 on Court 3.

Ranked No.571 in the world after being unable to play for more than two years while fighting chronic fatigue, Hives’ consolation is a career pay day of £50,000 ($88,000).

The departures of Saville and Hives followed Inglis’s exit on Monday with a tough three-set loss to Dalma Galfi.

Inglis, who also won through qualifying to her first Wimbledon main draw, took the opening set before bowing out 5-7 6-3 6-4 to the Hungarian.

Fellow qualifier Astra Sharma will resume her tussle with Germany’s Tatjana Maria later on Tuesday after the match was suspended under fading light at one set apiece.

Sharma will be serving at 6-4 3-6 when the match continues.