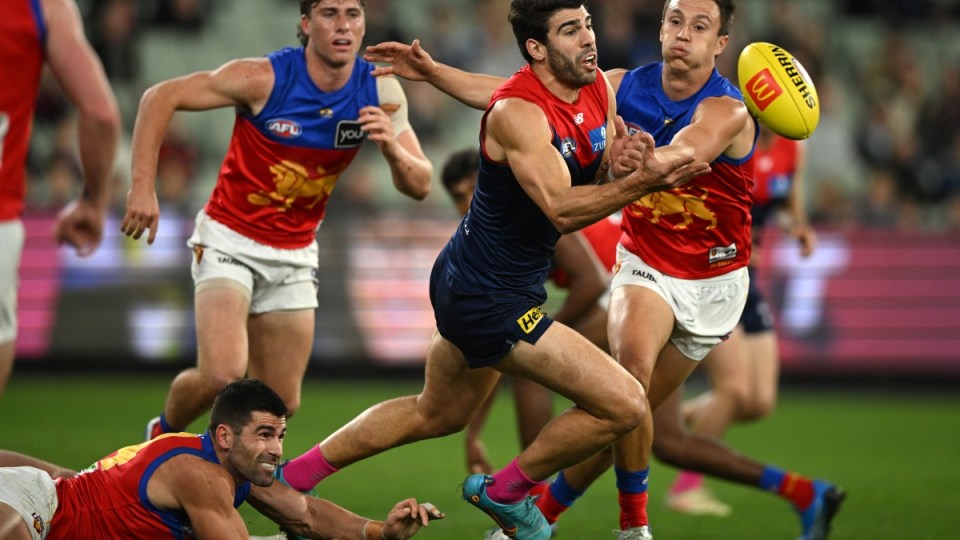 Melbourne was much too good for Brisbane, winning by 64 points in their top of the ladder clash. Photo: AAP

Melbourne has rediscovered its mojo in a 64-point hammering of Brisbane that has re-established the reigning premiers as this year’s AFL flag favourites.

The Demons triumphed 16.21 (117) to 7.11 (53) at the MCG on Thursday night, snapping a three-game losing streak and displacing the Lions at the top of the ladder in the process.

Steven May had mixed results on return from his club-imposed suspension when he blunted Brisbane spearhead Joe Daniher but made a few costly errors, especially with ball in hand.

Just about everything else went the Demons’ way as they laid the victory platform with a destructive six-goals-to-one second term, having trailed at quarter-time for just the second time this season.

Melbourne won contested possession in a landslide (170-133) – a repeat of last year’s qualifying final dominance over the Lions – and got on top of their opponents at stoppages (35-21).

James Harmes put the clamps on Lachie Neale, restricting the Brisbane ball magnet to eight disposals during the middle two quarters, and Jake Lever starred in defence with 15 intercepts.

The Lions had no clear individual winners in their heaviest loss of the season after three previous defeats by a combined 29 points.

Andrews (shoulder) and Rich (shin) required treatment on injuries but played out the match, while Jarryd Lyons (ribs) was eventually substituted out after being crunched in a second-quarter marking contest with Fritsch.

The result extended the Lions’ barren run at the MCG, where they last won in 2014 and have now lost 10 consecutive matches.

May was back for his first appearance since round 11, when he suffered concussion, and looked shaky early but worked his way into the game.

He put teammate Angus Brayshaw under pressure with a handball that led to Brisbane’s first goal and gave up another when he infringed on Daniher in a marking contest.

It was the only major Daniher (1.3) kicked from his nine disposals.

May’s turnover by foot in the second term led to a Robinson goal, which ended a run of five straight for Melbourne.

It was only a slight blip for the home side, which was firmly in control by half-time.

Melbourne climbs back to AFL summit after dominating Brisbane Lions