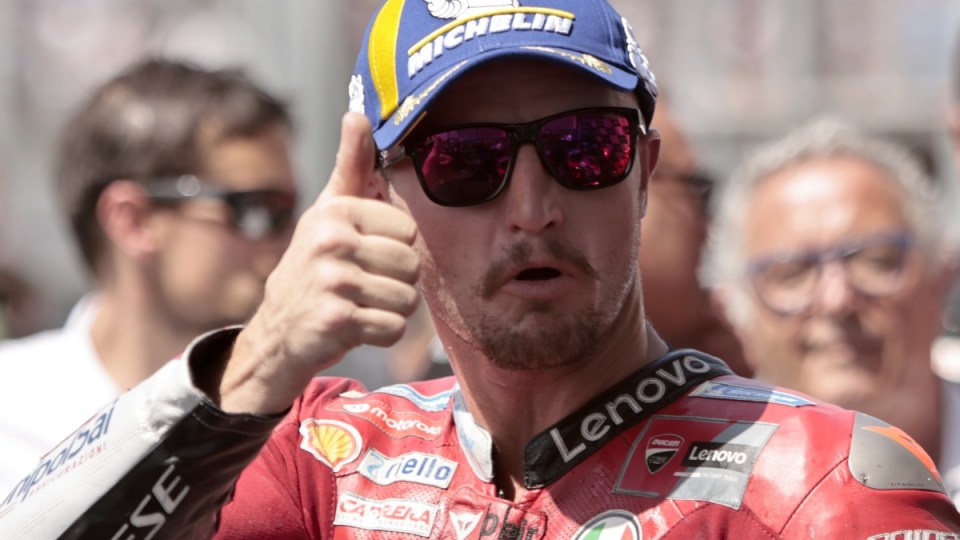 Australian Jack Miller has earned another podium spot in his difficult MotoGP season, overcoming a penalty to finish third at the German Grand Prix.

The Ducati factory rider from Townsville had to take a long lap loop penalty on Sunday for crashing under yellow flags in qualifying but he still enjoyed one of his best races to earn his third visit to the podium this year.

Up ahead, Yamaha’s world champion Fabio Quartararo won comfortably to extend his lead in the riders’ standings, while his closest championship contender Aleix Espargaro, of Aprilia, finished fourth at the Sachsenring.

Miller stalked Espargaro for much of the second half of the race before a mistake from the Spaniard enabled him to cash in with three laps left to power through to third place.

He took the service road to give his gloves to a super fan! #GermanGP pic.twitter.com/sMiVAXtBDq

“I felt I had good pace, I just had to manage it,” Miller said.

“Aleix was riding well. I couldn’t get past him until he made a mistake.”

Frenchman Quartararo, who started second on the grid, stormed into the lead when the lights went out as pole sitter Francesco Bagnaia, Miller’s Ducati teammate, dropped down to second.

The duo battled for the lead over the next three laps before Bagnaia slipped and crashed, leaving Quartararo to cruise to the finish.

Quartararo’s compatriot Johann Zarco of Pramac Racing briefly threatened to challenge him for the lead but ultimately settled for second.

Miller’s podium marked some good news for the Queenslander, whose move to Red Bull KTM next season after four years at Ducati has been one of MotoGP’s big stories recently.

With Bagnaia challenging for the championship before his Sunday crash, Miller’s seat had been under threat all season, with the 27-year-old opting to add some stability into his career with his two-year deal at KTM.