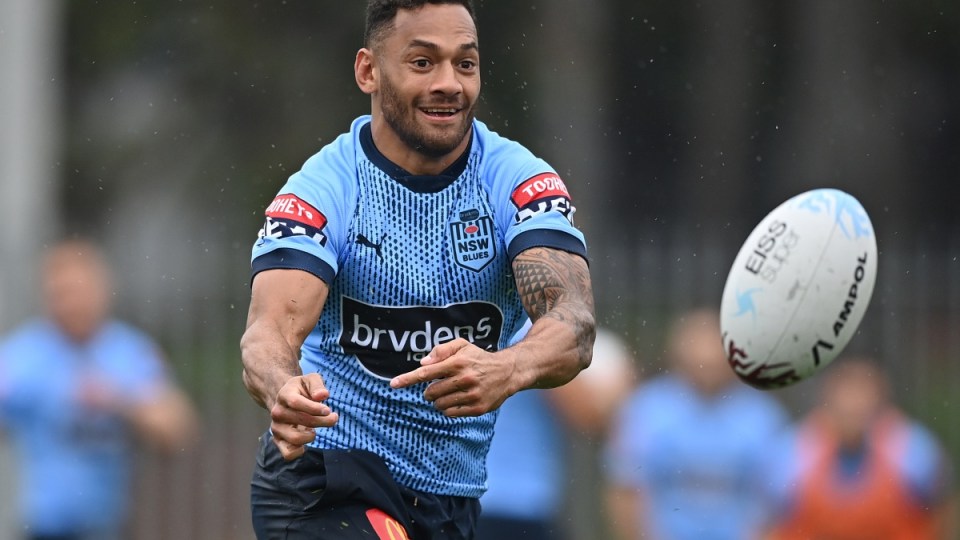 Penrith's Api Koroisau is one of at least five changes to the NSW State of Origin side. Photo: AAP

Matt Burton and Siosifa Talakai are poised to make their State of Origin debuts with New South Wales coach Brad Fittler making at least five changes to his team for Game II in Perth.

Fittler on Sunday night named a 22-man squad resembling nothing like the one that was beaten in Sydney, with seven new faces across the group.

Ryan Matterson, Reagan Campbell-Gillard, Kotoni Staggs and Tariq Sims have all been axed after playing in the series-opening loss, while Jack Wighton is out with COVID-19.

In their place, Apisai Koroisau is set to make his Blues return on the bench in the must-win clash, while Angus Crichton and Jake Trbojevic have also been recalled after they were controversial omissions for Game I.

But there is no room for Josh Addo-Carr, who has been left out despite scoring five tries in the two games for Canterbury immediately after his shock snubbing.

Fittler will not confirm his 17-man team until Monday morning, but Victor Radley, Jordan McLean, Joseph Suaalii, Clint Gutherson and Nicho Hynes were also part of his wider squad on Sunday night and are expected to act as reserves.

The Blues will also be sweating on Monday morning’s charge sheet that is set to drop before they take off for Perth, with Burton potentially in trouble for dangerous contact on Alex Twal.

Burton was not penalised or put on report for the incident, where he inadvertently pushed Twal’s head into ground after fighting off kick pressure in Canterbury’s win over Wests Tigers.

The incident is similar to the grade-one charge that was levelled against Felise Kaufusi last week for his contact on Sam Walker, with the Melbourne second-rower winning that case at the judiciary.

Only a grade-two charge would rule Burton out of his Origin debut, given he would be able to accept a fine for a grade-one offence.

Burton has spent this year playing at five-eighth for Canterbury, but was Dally M centre of the year for Penrith last season.

Starting at left centre, he will reunite with his previous club combination of Jarome Luai and Brian To’o, while he can also move to the halves if needed.

Stephen Crichton would then be expected play right centre, making for seven Panthers’ in the Blues team.

Talakai will come off the interchange as a versatile option out wide or in the forwards, with Angus Crichton, Trbojevic and Koroisau all joining him on the bench.

“To get this opportunity means the world,” Talakai told reporters as he arrived at the team’s hotel in Sydney.

Koroisau’s selection comes a year after he was threatened with a Blues ban for breaking COVID-19 protocols in 2021.

But his inclusion is crucial to Fitter’s game plan after NSW were beaten around the ruck in Game I in Sydney and desperately lacked the kind of spark Queensland produced off the bench when Harry Grant was brought on.

Who was the King? How Elvis Presley devoted his life to a consuming passion
Giants beat Collingwood Magpies to advance to Super Netball preliminary final
Today's Stories