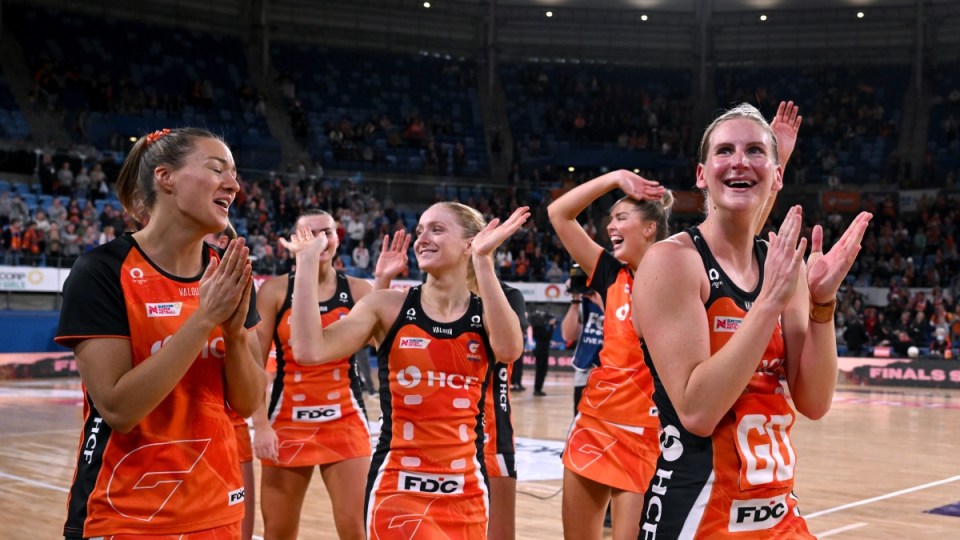 The Giants have advanced to the Super Netball preliminary final after a 55-48 win over Collingwood. Photo: AAP

The Giants remain in the hunt for successive Super Netball grand final appearances after a strong second-half effort set up a 55-48 home elimination final win over Collingwood in Sydney.

Trailing by three points at half-time and two inside the last two minutes of the third quarter on Sunday, the Giants hit three successive two-point shots to lead 43-39 at the final change.

Collingwood got the deficit down to two, but goal shooter Jo Harten made five successive shots to swell the Giants buffer to seven.

England stalwart Harten, who shot 40 from 44 including four of six Super Shots, was rock solid as was wing attack Maddie Hay.

The Giants missed more shots than the Magpies but the home team hit six of nine Super Shots, while Collingwood netted just one of three.

“I think there’s still so much to brush up on, we were a bit wasteful of our centre pass tonight, little errors, communication breakdowns really frustrated me, but it’s really easily fixed,” Harten said.

2 teams. 1 ticket into the big dance. The stage is set for the Preliminary Final.#SSN2022 #SSNFinals pic.twitter.com/BmLsVifAnn

“They (Vixens) have threats all over the courts. I’m not going to pick a (single) threat, they are a team I greatly admire,” Giants coach Julie Fitzgerald said.

The Giants, notched a 12th straight Super Netball win over Collingwood, which has lost all three of its elimination finals.

Magpies coach Nicole Richardson was proud of her team’s effort but was frustrated by some of the officiating in the second half, particularly four offensive contact calls against Collingwood in the circle.

“I was told the intensity of the game lifted in the second half, so the umpiring had to change,” Richardson said.

“I was super frustrated because what was allowed in the first half compared to the second was very different.

“In terms of where our year has been, they fought hard and I’m super excited and can’t wait see what this group can do next year.”

In a tight first quarter in the first finals match played at Sydney’s Ken Rosewall Arena, neither team led by more than three with the Giants up 13-11 at the first change.

The Magpies outscored the home team 17-12 in the second quarter to lead 28-25 at half-time.

“I thought we looked a little bit nervous in the second quarter. We were just a little bit tentative in everything we did trying to keep the ball. We didn’t give it when we could,” Fitzgerald said.