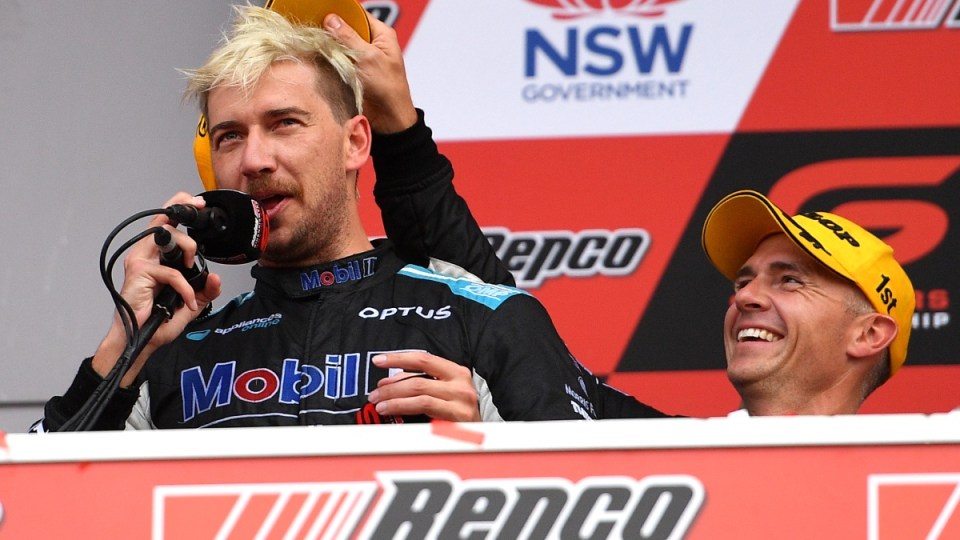 Supercars star Chaz Mostert has bounced back from first-race disqualification to win in Darwin. Photo: AAP

Bathurst 1000 champion Chaz Mostert has gone from zero to hero in Darwin after rising from disqualification despair to claim his fourth win of the Supercars season.

The Walkinshaw Andretti United star was excluded from the first race of the weekend on Saturday, despite finishing fourth, after stewards ruled an illegally operated fan was put onto the radiator of Mostert’s Commodore.

But the frustration of the opening race was forgotten in 24 hours as Mostert collected his 20th career win during a dramatic finish.

The safety car was called out on lap 26 after wildcard entry Zak Best was pushed off track by Garry Jacobson.

Mostert made the most of the restart and held off a brave charge from De Pasquale during the final few laps.

Showing how much the win meant to him, Mostert jumped onto the hood of his Commodore and pumped his fists.

In a blow for Shane van Gisbergen, the championship leader was slapped with a 15-second penalty that pushed him to 21st.

What an intense last lap!

Earlier, Waters survived a wild second race to collect his third win of the season.

The race was suspended on the first lap for almost 15 minutes after Courtney went flying across the grass at turn five, hitting Pye and Tom Randle on the way.

All drivers left their cars unharmed but Courtney and Pye took no further part in the race after copping severe damage to their vehicles.

“Someone got in the left rear quarter and then just spun us off to the left and a passenger from there,” Courtney said.

Ford veteran Will Davison, who on Saturday took part in his 500th Supercars race, finished behind Waters in second, while van Gisbergen crossed the line third.

“(Saturday) wasn’t ideal but awesome to bounce back on pole and win,” Waters said.

“We’re not usually that strong up here (in Darwin) so it’s nice to get a trophy and reward all the team for all their hard work.”