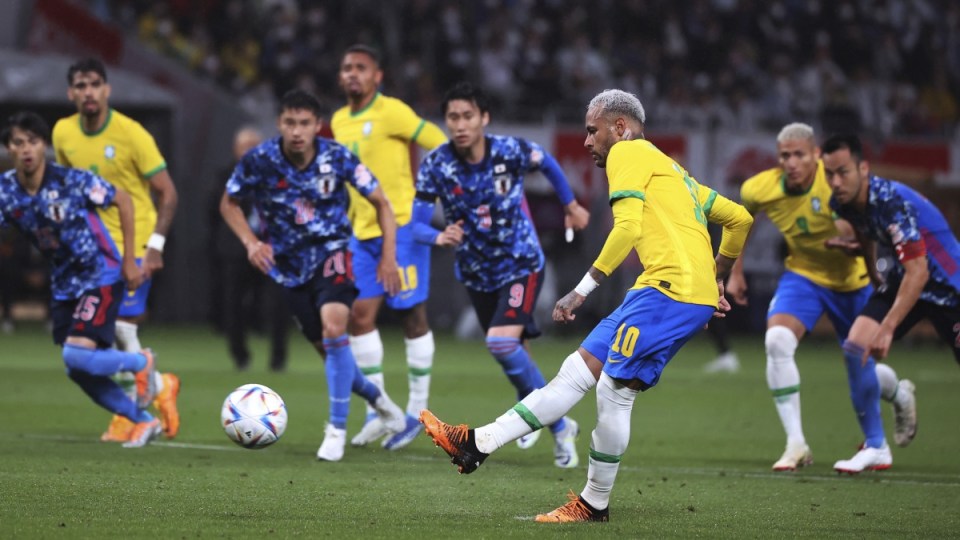 Brazil has defeated Japan 1-0 in a friendly after a penalty by Neymar in the 77th minute in Tokyo. Photo: AP

The forward coolly slotted the ball past Shuichi Gonda to hit his 74th goal in 119 internationals after being frustrated on several occasions by the Japanese goalkeeper in front of a rain-soaked crowd of 63,638 fans.

Brazil’s win came off the back of its 5-1 thrashing of South Korea on Thursday as Tite’s side prepare for its assault on the World Cup in Qatar in November.

The visitors threatened early, with Lucas Paqueta hitting the post inside the first two minutes when he latched on to Neymar’s instinctive backheel pass inside the area.

I imagine this is basically going to be treated as a win for Japan in the morning. And truth be told this was a very good result for the Samurai Blue, but they are going to have to be a LOT better in Qatar.

Fred fired over from distance soon after and Raphina forced Shuichi Gonda to save with his feet before Neymar’s firmly struck, curling effort from outside the area was palmed to safety by the goalkeeper after flying through a crowd of players.

Gonda was on hand again to keep out the visitors three minutes before the end of the half, with Pacqueta slipping the ball through to Neymar, but the Paris St Germain man was denied.

Neymar continued to probe, seeing a shot blocked by Endo’s head eight minutes after the restart, while Ko Itakura made a perfectly timed intervention to put himself between the Brazilian striker’s volley and the Japan goal.

The pressure eventually told, however, with Neymar at the heart of the action once more.

The 30-year-old’s initial effort was well saved by Gonda but as substitute Richarlison attempted to collect possession he was brought down by Endo and referee Alireza Faghani pointed to the spot.

Neymar sent Gonda the wrong way to score for the ninth time in five appearances against the Japanese and move closer to eclipsing Pele’s long-standing mark.