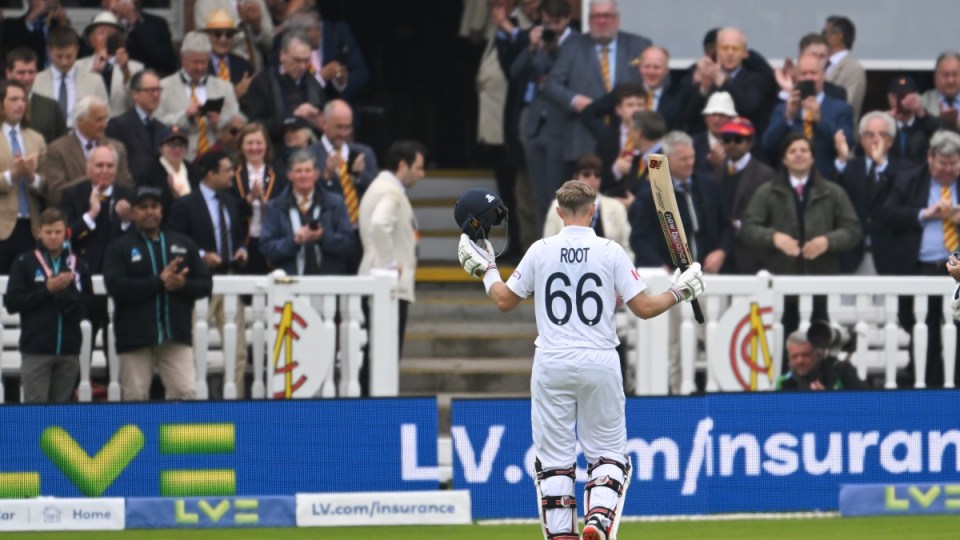 Former captain Joe Root gave successor Ben Stokes the perfect start to his reign by carrying England to victory with a match-winning century in the first Test against New Zealand on Sunday.

Root, who resigned as skipper in April after five years and a record 64 games in charge, produced a decisive knock of 115 not out to set up a five-wicket win at Lord’s.

In an ice-cool partnership with Ben Foakes, who made an unbeaten 32 in a stand of 120, Root shepherded his side to a stiff chase of 277 with his first ever fourth-innings hundred.

By doing so Root became just the second Englishman to reach 10,000 Test runs – following in the footsteps of his own predecessor Sir Alastair Cook.

The master at work taking us to victory 👑

The symmetry of their achievements does not end there, with both men exactly 31 years and 157 days when they crossed the threshold.

It was Root’s 26th ton in total, the same as West Indian great Sir Garfield Sobers, but he will be even more satisfied by its importance to the team.

England was marginal favourites on resuming at 5-216, with 61 runs still needed, but the equation still looked a taxing one.

With thick, grey clouds overhead and the floodlights glaring from ball one, conditions were far from ideal for batting.

A fragile tail, featuring at least three natural No.11s, also cranked up the responsibility on the overnight pairing of Root and Foakes.

It's been a while. That winning feeling 🙌

But a game that has see-sawed back and forth with a series of twists along the way was put to bed in unusually serene fashion.

New Zealand had hoped to hang in and use the second new ball to work some magic, but it could not halt England’s scoring and did not even get to unwrap a fresh Dukes.

Root started the 77th over on 98 runs in the innings and 9998 in his career and pinged paceman Tim Southee to midwicket for a couple to bring up a proud double.

He then finished the job in a blaze of glory, taking Southee for three boundaries in an over as he wrapped things up with a merry swing through midwicket.

Root, named player of the match, claimed winning meant more to him than his century or passing the milestone of 10,000 Test runs.

“Obviously it feels fantastic. More than anything, first of all, for us to have won this Test match after such a long time is the greatest feeling of all,” he said.

“Hopefully we can really use this as a way to leap forward as a group.

“I absolutely love the group of players that we play with and I couldn’t wish for a better person to be leading this team.”

Stokes was pleased with the way England’s summer and his captaincy had begun.

“It was a great Test match. It always seems to be for England v New Zealand at Lord’s, but it was a fantastic Test match to be part of,” said the all-rounder, who contributed to the run chase with 54.

“Regardless of being captain, the first Test match of the summer has always got a buzz about it, but obviously it was a special week. To come away with the win obviously makes it even better.”