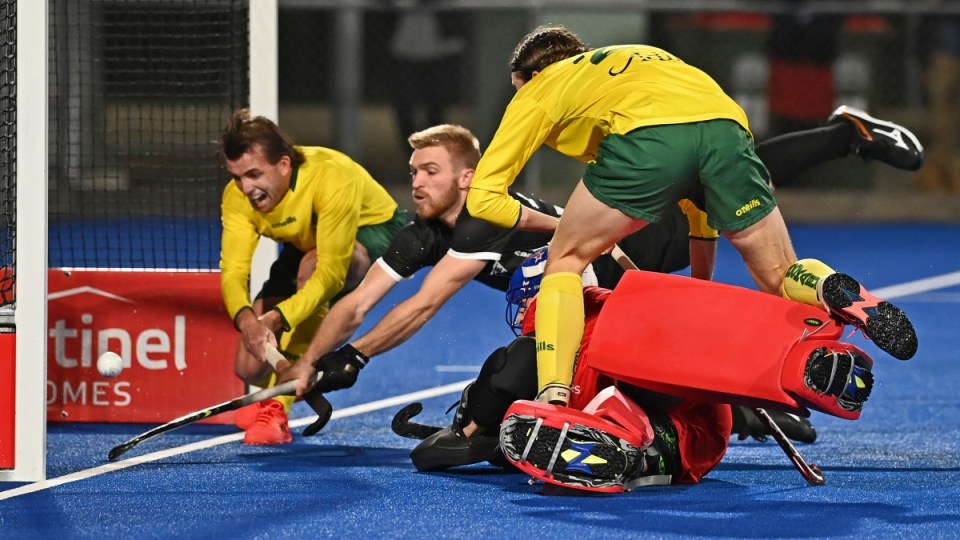 The NZ goal was under attack all match as Australia thumped the hosts 8-1 in Auckland on Tuesday. Photo: AAP

Nathan Ephraums scored a hat-trick as Australia opened the trans-Tasman hockey series against hosts New Zealand with a crushing 8-1 victory in Auckland.

The 22-year-old was in menacing form thoughout Tuesday night’s contest and was backed up by Blake Govers, who grabbed a brace to surpass his 100th international goal.

But it was the Black Sticks, looking to break a winless drought against the Kookaburras since 2016, who were the first to score.

Tough day at the office.

We go again on Thursday. Always backing our boys to bounce back. pic.twitter.com/e49TNaHCdD

David Brydon won a free hit against the run of play in the second quarter before firing a reverse shot to score his maiden international goal.

The goal was hardly celebrated when visiting captain Aran Zalewski sent through a baseline ball to find Ephraums on the back post, the Victorian slotting his sixth international goal to level the score.

The Kookaburra’s second came from Flynn Ogilvie, who saw his  penetrating goalward push from inside the circle sneak over the line.

It was all green and gold thereafter – Josh Beltz crashing a pass to Ephraums who earned his second goal with a reverse deflection into the back of the net.

The Kookaburras earned a penalty stroke after a goal-bound ball struck a Black Sticks defender on the line with Govers stepping up to notch his 100th international goal in 114 games for a 4-1 lead.

Tom Wickham was next to hit the scoreboard with his 34th international goal, followed by Ephraums who completed his hat-trick with a classy deflection that finished in the roof of the net.

A Govers flick from Australia’s 10th penalty corner hit the top of the net to extend the Kookaburras’ lead to 7-1, heading into the final break.

But the scoring didn’t end there as Jacob Anderson got Australia’s eighth from a Beltz pass to complete the Black Sticks’ misery on the night.

The second match in the four-game series takes place on Thursday (1705 AEST).