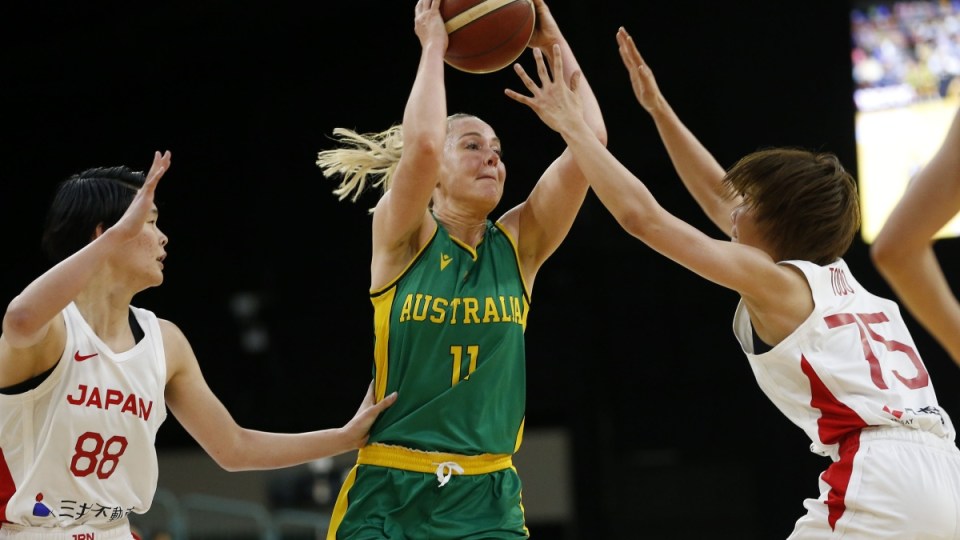 Tess Madgen of the Opals looks for support in game three of the Australia-Japan series in Newcastle. Photo: AAP

A promising international debut from Anneli Maley has offered some solace for the Opals, who went down 69-67 in Newcastle to lose their three-match women’s basketball series to Japan.

It was a third straight nail biter, with Australia winning the first game by six and Japan squaring the series with a one-point victory in game two.

A youthful Opals side, without several stars who were playing for overseas clubs, showed plenty of grit against a Japan team that contained a number of last year’s Olympic silver medal-winning squad.

Forward and WNBL 2021-22 MVP Maley, who returned from the US on Saturday after a short stint with Chicago Sky, had her first chance to push for a spot in the Opals squad for the world championships in Australia in September.

A proper way to end a wonderful Friendly Series 👏

The #AkatsukiFive prevail over the Opals in a tight Game 3, in front of a lively crowd in Newcastle 🙌

What a nice way to get ready for the #FIBAWWC! pic.twitter.com/VnOEidTElJ

She finished with 11 points and seven rebounds after coming off the bench just over four-and-a-half minutes into the game.

The visiting team made a decisive 8-0 run in the fourth quarter during which Australia went more than five minutes without scoring, missing six field goal attempts in that time.

Cayla George hit a three pointer with 28 seconds to go to cut Japan’s lead to two, but Australia couldn’t get another shot off before the end.

“Everything I experience in the basketball world, I take it, learn from it and grow from it" – Anneli Maley on returning home, and pulling on the green and gold.

Of the players to impress over the series, acting Opals coach Cheryl Chambers told ESPN: “The consistency of Sarah Blicavs was good, Cayla George was good, Tess Madgen was strong through the whole lot.”

She said it was good to give experience to younger players like guards Shyla Heal and Jade Melbourne.

It was a typical hustle play as she pounced on a missed free throw from Blicavs, grabbing the rebound and scoring from close range.

“I wish we got the win, but they are a really talented team Japan. And for my first Opals experience to be playing against a team like that was really special,” Maley told ESPN.

“I don’t know any of the offences, I haven’t been in camp, and everyone talked me through every step of the way.”

She scored seven points in the first quarter, which finished with Australia holding a 23-18 lead.

Japan captain Maki Takada scored the first eight points of the second quarter to put her team in front and they held a one-point lead at both half and three-quarter time.

Australia made just five of 10 free throws, while Japan, which is in the same world championship group as the Opals, hit seven of nine.

Both sides shot just over 40 per cent from the field but struggled from three-point territory, with Japan hitting eight of 28 and Australia four of 17.

Australia will play Canada and Puerto Rico in America in July in two lead-up games to the world championships.