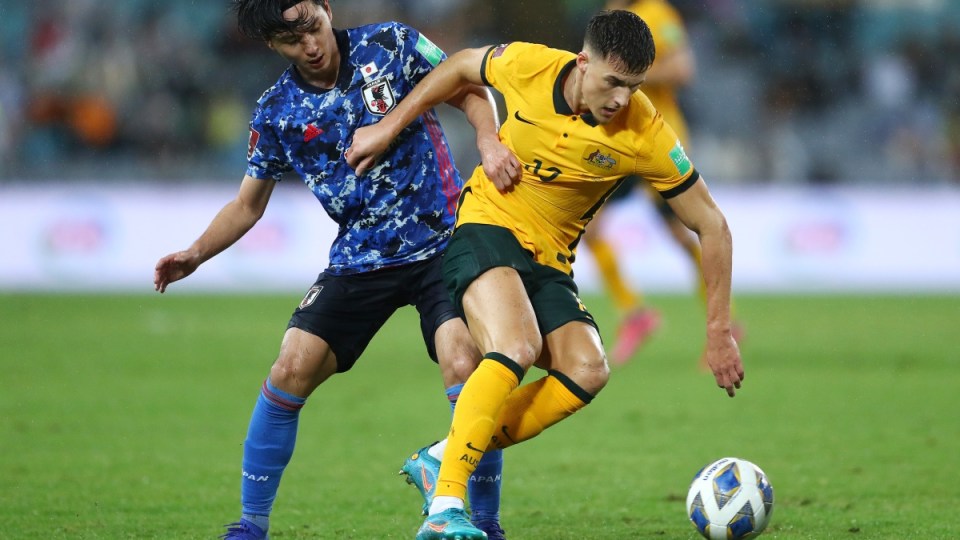 Ajdin Hrustic is tipped to be the key figure for the Socceroos following Tom Rogic's withdrawal. Photo: Getty

Europa League winner Ajdin Hrustic is being backed as the man to fill Tom Rogic’s boots in the Socceroos’ quest to reach a fifth straight World Cup.

Australia’s hopes in its must-win match against United Arab Emirates were dealt a huge blow when star midfielder Rogic’s withdrawal was announced on Tuesday.

The 29-year-old, without a club after leaving Celtic having helped the Scottish giants to a 10th league title in the past 11 seasons, cited personal reasons for his decision not to travel to Qatar.

The move leaves coach Graham Arnold without one of his main attacking weapons heading into next week’s must-win Asian playoff against UAE in Qatar.

Tom Rogic has withdrawn from the Socceroos’ squad for June 2022, citing personal reasons. We wish Tom well as we continue to focus on the task ahead in Doha.#AllForTheSocceroos

“In every bit of media and discussion surrounding what the Socceroos need to do to win this game, everything centred on Tommy having a good game and providing that attacking threat and quality that we’ve been missing in that last couple of games without him there.”

Arnold will not be calling up a replacement for Rogic, sticking instead with the 28 players originally selected.

With Aaron Mooy having barely kicked a ball in 2022 due to the COVID-19 related suspension of the Chinese Super League and Middlesbrough’s Riley McGree largely untested at international level, Brosque said Hrustic looms as the man who must deliver if Australia is to reach November’s World Cup finals.

Only one more week until the @Socceroos World Cup Play-Off! 🙌

United Arab Emirates v Socceroos | Wednesday June 8 from 3.30am AEST on 10 and 10 play on demand pic.twitter.com/ci6hAIfIRI

The 25-year-old’s importance to Arnold’s plans has grown almost exponentially throughout the qualifying campaign, going from fringe player to regular starter, while he comes into camp on the back of scoring a penalty in Eintracht Frankfurt’s Europa League final shootout win over Rangers.

“There’s probably no one better placed given what he has just come off the back of doing himself,” Brosque said.

“He played in a Europa League final, won the final, scored a penalty in the shootout as well.

“We know he’s got confidence and the team will be looking to him to create, to do something special, and I think he’s got the confidence in himself and obviously the backing from Arnie to be able to do that and take the game to the UAE team.

“Hrustic can take that mantle of being the guy to win us a game and create for us.”

A victory in the June 7 clash in Doha would set up a game against Peru the following week for a spot in November’s World Cup in Qatar.

“My focus must now be on the players we have here in Qatar,” Arnold said.

“We have selected an extended squad of quality players and I believe that we will achieve something special for Australia over the next two weeks.”

Rogic’s withdrawal comes after he and several other leading players were unavailable for a mixture of COVID-19, injury and personal reasons during the most recent Socceroos camp in March.

Missing several big names, the Socceroos suffered back-to-back defeats to Japan and Saudi Arabia in that window to miss out on automatic qualification and be forced into the playoffs.

Australia will warm-up for next week’s playoff with a friendly in Doha against Jordan on Wednesday (Thursday 4am AEST).

The UAE meanwhile finalised its preparations with a 1-1 draw against African nation Gambia in Dubai on Monday.