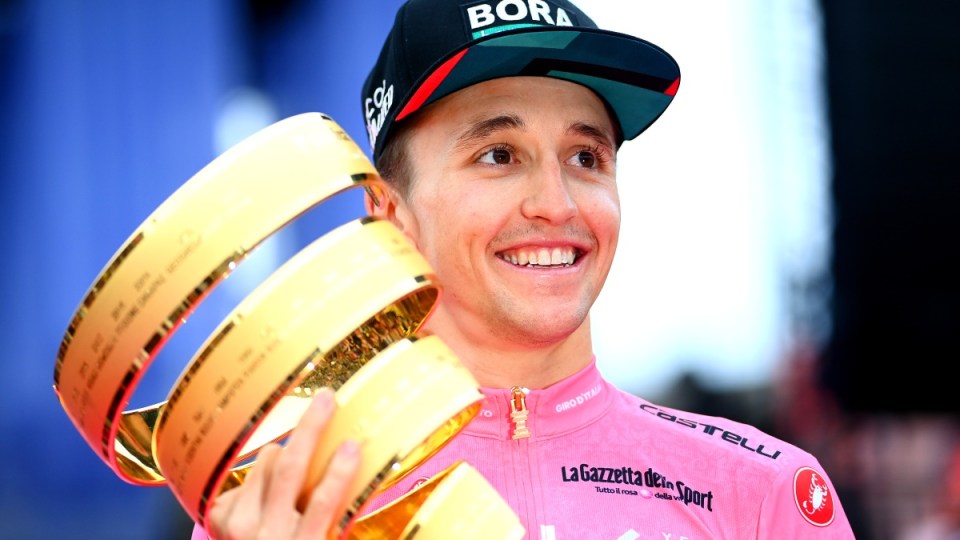 'I didn't know I would be fighting for the win,' says Jai Hindley. Photo: Getty

Jai Hindley has created history by becoming the first Australian to win one of cycling’s greatest races, the Giro d’Italia in Verona.

Hindley, who joined German team Bora-hansgrohe this season, secured the overall victory convincingly by one minute 18 seconds from Ecuador’s Richard Carapaz, who was 10th on the stage, with Spain’s Mikel Landa third, 3:24 behind.

Since his 2020 breakthrough, Hindley has suffered a nightmare series of crashes, illnesses and injuries which had halted his progress, including a horror Giro last year when he abandoned with an agonisingly painful saddle sore.

He wrote a Shakespearean tale of redemption on Sunday, clinching the title in the final time trial of the Grand Tour’s 105th edition.

Hindley negotiated the 17.4km course safely, his total commitment tinged with just a touch of caution, to finish 15th on the stage in 23 minutes 55 seconds.

The only important thing, though, was he was just seven seconds behind nearest challenger, Olympic champion Carapaz.

It allowed him to finish one minute and 18 seconds ahead of the Ecuadorian in the General Classification, and three minutes and 24 seconds clear of Spain’s Mikel Landa Meana in third.

“I’m really proud to be Australian and happy to take this one home,” said the 26-year-old, who becomes the country’s second Grand Tour winner after Cadel Evans, the 2011 Tour de France champion.

Fittingly, it was exactly 20 years to the day since Evans had also become the first Aussie to earn the pink jersey — which he wore for just one day — on his Giro debut.

“It’s a beautiful feeling,” added Hindley, close to tears of disbelief while still trying to come to terms with a triumph that had looked a serious long-shot at the start of the gruelling three-week, 3445km slog.

“Last year was really, really hard and I really fought hard to be back here,” said the Spanish-based Hindley, who hasn’t seen his family back home in Australia for two-and-a-half years.

“But I didn’t know I would be fighting for the win.

“A lot of emotions out there today. I had in the back of my mind what happened in 2020 and I wasn’t going to let that happen again. To take the win is really incredible.”

The feat ranks second only to the 2011 Tour de France win by Cadel Evans and comes 20 months after Hindley lost the leader’s ‘Maglia Rosa’ (pink leader’s jersey) on the last day in Milan in 2020.

On that day Hindley was pipped for the honour by 39 seconds, but he made sure there was no repeat.

“There’s a lot of emotions out there and in the back of my mind was what happened in 2020, and I wasn’t going to let it happen again.’’

Hindley said he made sure he descended carefully but ‘‘gave everything to the line’’ to ensure he enjoyed the ‘‘incredible feeling’’.

He becomes just the second Australian ever to win one of cycling’s three Grand Tours.

Evans also wore the ‘Maglia Rosa’ in May 2002 but did not win the race.

Hindley set up the win on Saturday’s punishing 20th stage, when he powered away from Carapaz on the last ascent.

“It was the perfect stage,” declared Hindley, who finished sixth on the stage behind Italian winner Alessandro Covi.

Fighting for every second 🤜🤛

In-car with @BORAHansgrohe as @JaiHindley goes into the Maglia Rosa on La Marmolada 💥
_____
🇮🇹 #Giro pic.twitter.com/1IR5wZhSVC

Covi won the 168-kilometre stage from Belluno by 32 seconds after his breakaway, but the main drama was going on behind on the Marmolada’s Passo Fedaia as Hindley unleashed his all-out attack to distance Carapaz in the final 2.5 kilometres.

It was perfectly executed as Hindley roared up to join his German teammate Lennard Kamna, who was already handily placed up the road, and between them, they quickly put Olympic champion Carapaz in difficulty on the Dolomites’ highest mountain.

The win in the 105th edition means Hindley joins many of the greats of the sport to have won the Giro, including Eddie Merckx, Miguel Indurain, Alberto Contador, Vincenzo Nibali and Egan Bernal.