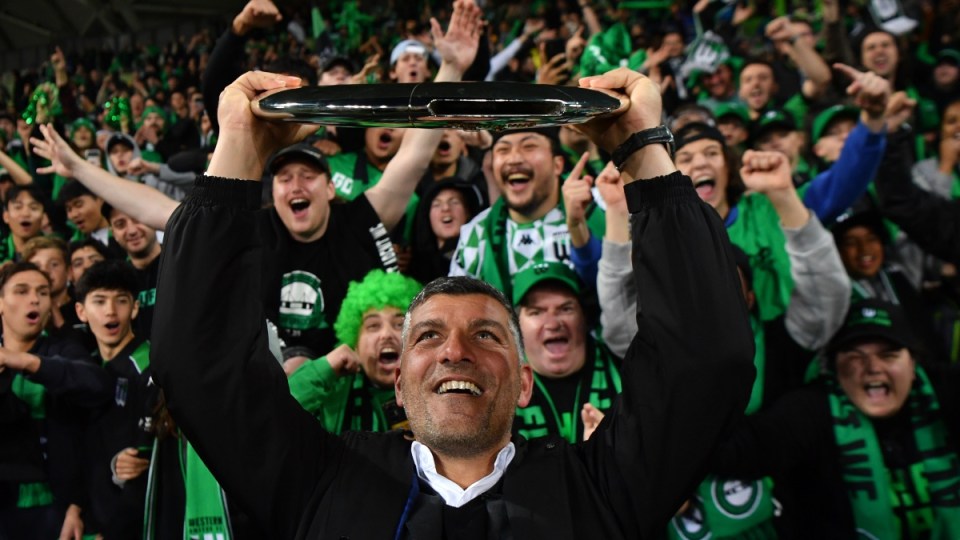 Western United is keen to lock in championship-winning mentor John Aloisi, well aware the “ambitious” coach is set to draw attention, including a potential Socceroos approach.

Halfway through his two-season deal, Aloisi has taken United from 10th place to champions and has been credited with overhauling the club’s culture.

United is yet to hold contract extension talks with Aloisi, but football director Steve Horvat and chief executive Chris Pehlivanis both said that would happen “in due course”.

“Those conversations will happen in due course because I really think we’ve built something really special this season and it’s really important now that we don’t rest on our laurels, that we build from here,” Horvat told reporters on Sunday.

Western United fans are singing his name and Niav Owens caught up with him amongst the celebrations.#ALeagueMenGF pic.twitter.com/Ywb21YjiXK

“We want to keep very best people at this football club and obviously one of those people is John Aloisi. So that’s definitely a priority for us.

“We knew coming in, John is a very ambitious coach.

“I don’t think he’s settled on winning an Australian title. He has his sights set on the likes of what Ange (Postecoglou) is doing and other coaches in their space.

“We will never hold back players, coaches, people that want to go to the next level, but we’ll try and keep everybody we can.”

On Sunday, Aloisi reiterated his desire to remain at United, while stressing his long-term ambitions.

“I’ve never shied away from that I want to get to the very top as a coach,” Aloisi said.

“I’m hopeful that one day I’m going to be good enough that I’ll be able to go to another level overseas.

“But at the moment, where I’m staying in Australia, I would love to stay with Western United.”

WE ARE CHAMPIONS OF THE A-LEAGUE!!!! pic.twitter.com/vPI8VTjEQY

Aloisi wouldn’t be drawn on whether he’d be a “runner” in the race for the next Socceroos coach.

“I don’t know. Look, I would be lying to say that I wouldn’t want to coach the national team because I would love to, because that’s the pinnacle for a player and also a coach,” he said.

“But whether they would even approach me, I don’t know. I’m not even thinking about that at the moment.”

Pehlivanis noted Aloisi’s ambitions meant a particularly long-term deal might not be in either party’s best interests.

“I need to understand what John’s vision is and there’s no point signing a five-year deal if in two years he wants to be Socceroos coach or he wants to be overseas,” Pehlivanis said.

“But I want to help him on that journey because then that’s when we’re fulfilling our job.”