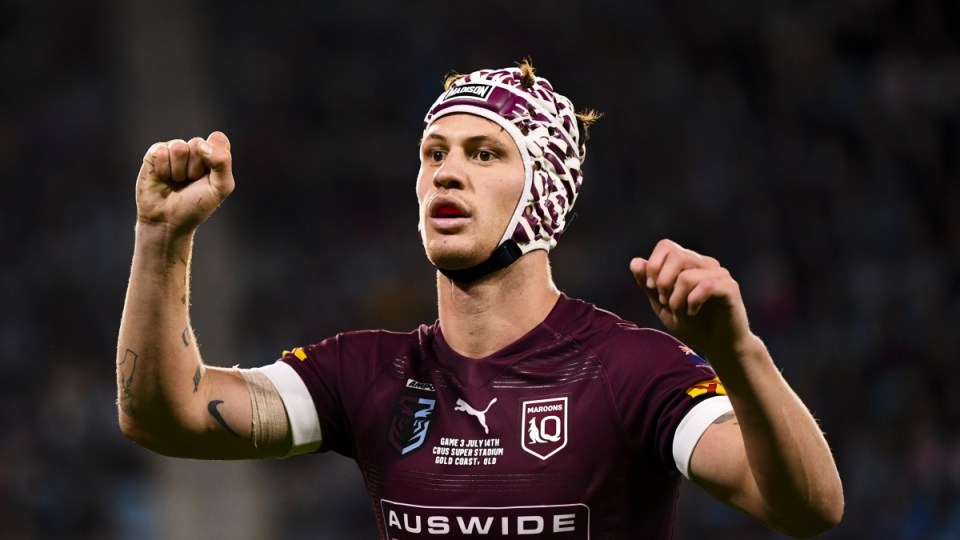 Kalyn Ponga has been tipped to thrive in the Origin series under new Queensland coach Billy Slater. Photo: AAP

Dane Gagai can see Kalyn Ponga’s game reaching new heights under Billy Slater when the fullbacks combine as coach and apprentice for Queensland.

Rookie mentor Slater will on Monday name his side for the June 8 State of Origin, Ponga overcoming the flu to all but confirm his spot with a confident showing in Saturday’s Newcastle NRL win.

Knights teammates Gagai and Ponga will be part of an otherwise new-look backline that is also set to include the fresh teenage face of Selwyn Cobbo.

Cobbo is expected to win the battle to partner Xavier Coates on the wing ahead of the likes of Corey Oates, Hamiso Tabuai-Fidow and Murray Taulagi.

North Queensland middle Reuben Cotter is the other man expected to make his debut off the bench, in another injection of youth to last year’s well-beaten side.

Serving as a bridge between Maroon generations, Gagai said Slater and former teammates-turned assistants Cameron Smith and Johnathan Thurston would “drive in what Origin is about”.

And in Ponga’s case the centre said Slater could work wonders.

“How Billy is with the young boys, his passion for it; he was never the biggest bloke but that didn’t matter, it’s what Queenslanders are about,” 19-game Origin veteran Gagai told AAP.

“He changed the mould of what fullbacks are, it’s exciting to think what he can do with Kalyn.

“I was fortunate to play alongside these guys in 2015.

“Now to see them as coaches, it’s going to benefit Queensland and I’m most excited by how many Queenslanders are playing good footy for the Cowboys and Broncos and big Tino (Fa’asuamaleaui) putting up crazy numbers for the Titans.”

“With Mal (Meninga) they had that 10 years (of series wins); they know what it’s about and they’ll bring that, drive it into whoever is selected.”

The June 8 opener in Sydney would be Ponga’s fifth appearance for Queensland, injuries restricting him to just four of a possible 11 games since his 2018 debut.

Ruled out of the first two games last year, an injured Ponga watched the Blues rack up record numbers to claim the series before returning to steer the Maroons to a game three win.

He said despite last week’s illness it’s the fittest he’s been on the eve of an Origin series, with the chance to pick Slater’s brain an added bonus.

“I have spoken to him since he has been appointed as coach and he has been very hands on with every Queensland player,” Ponga said.

“I am definitely going in there to get as much as I can out of it; Billy is very good like that.

“He is very giving and he cares about his players. He cares about the fullback position and he wants to win, no doubt.”

Netflix will soon have ads, but it might not be what you think
Champion British jockey Lester Piggott dies at 86
Today's Stories