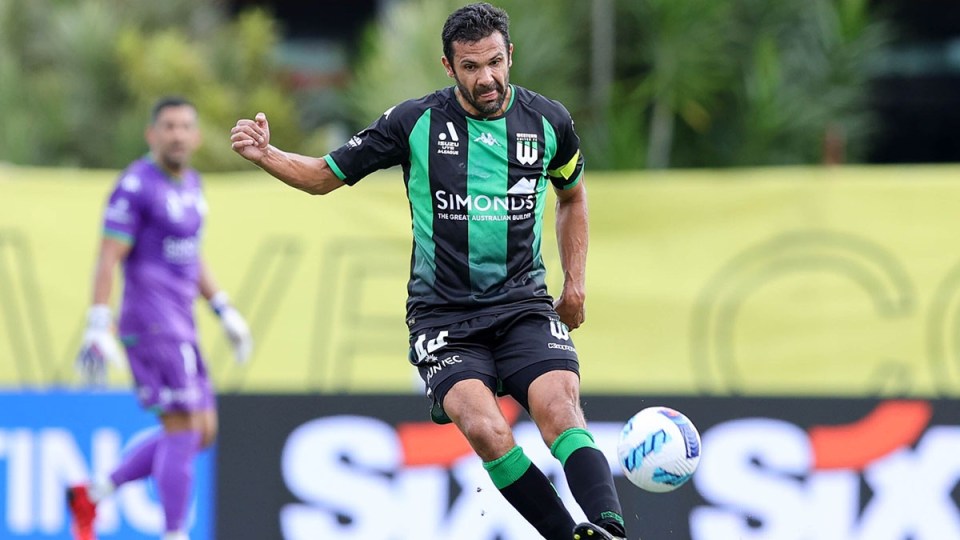 Western United's Nikolai Topor-Stanley won't get to play in a fifth A-League Men’s grand final due to injury. Photo: AAP

A-League Men games record holder Nikolai Topor-Stanley’s bid to play in a fifth grand final has fallen at the last hurdle, with the Western United defender unable to overcome a foot injury in time to face Melbourne City.

Topor-Stanley, 37, has played in a losing team in four grand finals, three at Western Sydney and one at Newcastle.

He had a fitness test on Monday in a last-ditch attempt to return from a ruptured tendon in his foot for a fifth crack at glory on Saturday, but fell short.

“I tried to give myself every chance to be fit and yesterday was a fitness test that I fell short of, which was probably not where I need to be to be able to function fully,” Topor-Stanley told AAP.

“I don’t want to take someone else’s opportunity away to contribute to a grand final.

“I knew I was a long shot of contributing again this season but I guess we did everything we could and tried to deal with whatever pain I could handle.

“But (there was) just nowhere near enough time.”

Topor-Stanley suffered the injury in United’s final regular-season game against Adelaide United, saying he felt a “pop” in his foot when he went to take off.

“It’s clearly frustrating from a personal point of view that I can’t be available but I have to push that aside,” he said.

“That’s part of being a leader, knowing how to deal with disappointment and compartmentalise that fact and support the boys and be positive, calm any nerves or offer any advice that I can to people that want it.”

How good have our A-Leagues fans been this finals series 🔥

We can't wait to see you at AAMI Park on Saturday! 😍

“It was only going to be probably a 10 per cent chance that he was going to get up for it,” Aloisi told AAP.

“But he wanted to do everything possible because he’s played a big part with us this season. He wanted to be part of that, playing in the grand final.

“On game day it’s going to be crucial that we’ve got someone like him and someone like Diamanti around as well. It’s a pity for him, but he still knows that he’s important for us.

“When you’ve got a player with so much experience that’s been in grand finals, that’s been around the group more than what I have, he can have a different discussion and chat with them and keep them relaxed, keep them positive, keep them up and about.”