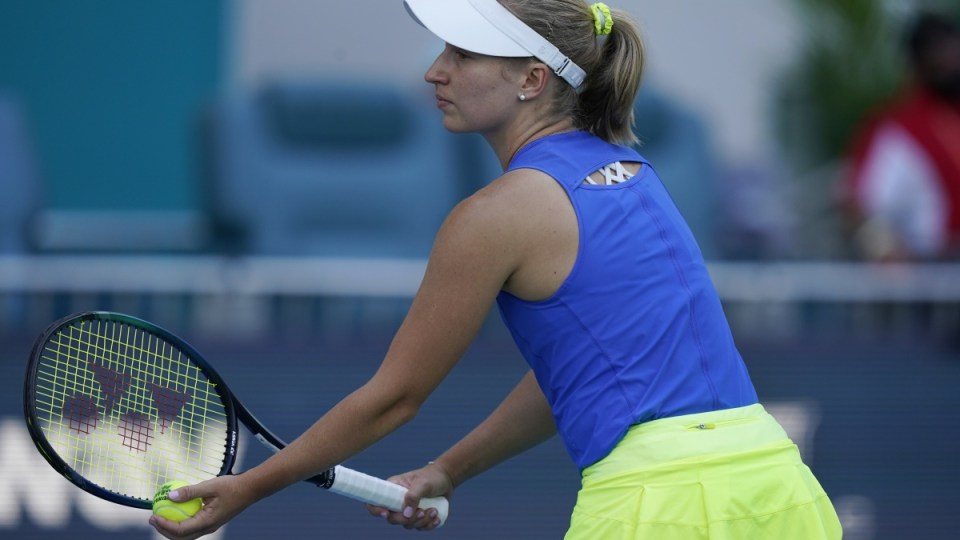 Australian Daria Saville has continued her revival to make it into the French Open second round. Photo: AP

Daria Saville has wasted no time in dashing into the second round of the French Open in businesslike fashion at in Paris.

‘Dasha’, as the Russian-born Australian is known by all, lived up to her name as she looked in a hurry to despatch Greek qualifier Valentini Grammatikopoulou, running out a 6-1 6-2 winner on Monday morning in less than an hour and a quarter.

The Melbourne player is the first Australian woman through to the second round, with her performance guaranteeing that she’ll now be back in the rankings as the country’s No.2 player behind Ajla Tomljanovic.

Back at Roland Garros for the first time in two years, the win marked yet more significant progress for the 28-year-old Saville as she continues her stirring return from injury.

🇦🇺 Daria Saville has booked her place in the second round of #RolandGarros, claiming a straight-sets victory. 🙌🤩

Next up – a meeting with two-time slam champion, No. 32 seed 🇨🇿 Petra Kvitova! 👀🍿#TheFirstServe pic.twitter.com/3q5fclaSU1

At the end of January, she was ranked 624 in the world as she trod tentatively on the comeback trail after 10 months out following surgery to cure a chronic achilles problem.

But less than four months later, after making the fourth round in two successive major WTA events at Indian Wells and Miami and now through to her first grand slam second round in Paris for four years, she is back hammering on the door of the top 100.

Meanwhile, Japan’s Naomi Osaka has crashed out of the French Open with a 7-5 6-4 first-round loss to American Amanda Anisimova, a year after her dramatic withdrawal from the clay court grand slam tournament amid mental health issues.

Up against 27th seed Anisimova early on day two, four-time grand slam champion Osaka never looked comfortable on her least favourite surface as she struggled to control her powerful game.

Anisimova, the 20-year-old who reached the semi-finals at Roland Garros in 2019, also beat Osaka in the third round at the Australian Open in January.

In the zone 😎#RolandGarros | @iga_swiatek pic.twitter.com/fAPGP5QHcf

On Court Phillipe Chatrier, top-seeded Iga Swiatek extended her winning streak to 29 matches by advancing to the second round in Paris.

Swiatek’s winning streak is the longest by any woman since Serena Williams won 34 in a row in 2013.

She has won the title at her past five tournaments and has also won a tour-leading 14 sets by 6-0 this season.