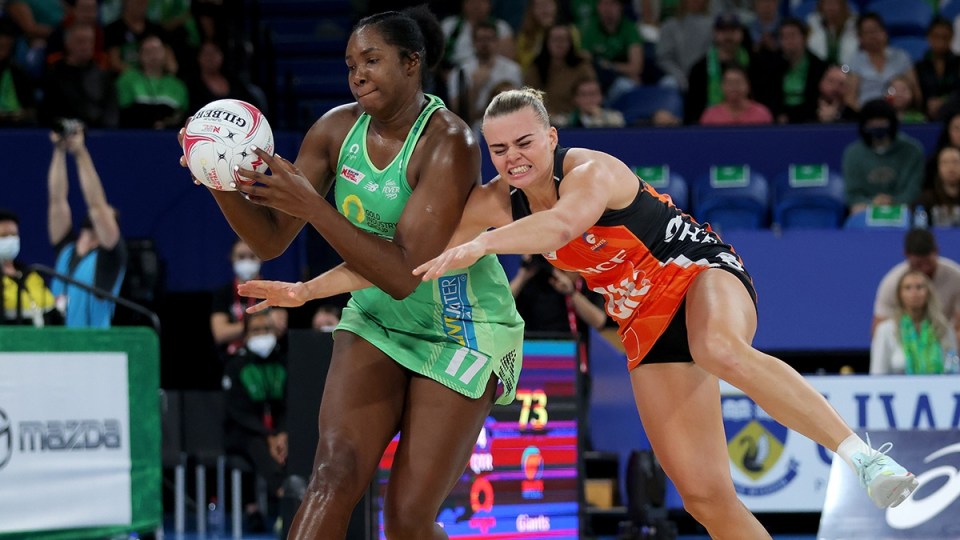 West Coast Fever has broken its record for the highest-ever Super Netball score in its 86-77 victory over the Giants at RAC Arena.

The previous record of 82 – held jointly by Fever and Giants – fell by the wayside in Sunday’s second-versus-third shootout, thanks chiefly to the world’s best shooter, Jhaniele Fowler.

The Giants defence had no answers for the towering Jamaican, who contributed 68 of Fever’s points, shooting at 99 per cent.

Her efforts helped Fever bounce back from the disappointment of Tuesday’s home loss to Melbourne Vixens and consolidate a top-two spot while giving coach Dan Ryan a birthday to remember.

“This was a tough one where we knew we had to come out and execute the game plan well,” Fowler said.

“We did for most of the game.

“Still work to be done but congratulations to us for working through it.”

The home side tightened up on defence and stretched its lead in the second term, while Fowler continued to keep the scoreboard motoring.

Is your team still in the hunt for finals with 3 rounds to go?#SSN2022 pic.twitter.com/KIjPqjxYc1

The pattern of the match was established – Fowler unstoppable for first 10 minutes of each term and then Harten (nine super shots) doing her best to limit the damage across the last five in reply.

Down 46-37 at half-time, the turnovers mounted in the third term for the Giants, who fell behind by 13 at the final change.

With the verdict seemingly beyond doubt, the primary point of interest in the fourth stanza centred on when Fever would break the scoring record – and by how much.

Their lead swelled to 18 when Fowler equalled the 82-goal milestone with 5 minutes 42 seconds to play, but a rare scoreless drought of more than three minutes meant there was a long wait for No.83, appropriately netted by Fowler.

A flurry of Harten super shots added some respectability to the scoreboard for the Giants, before Fowler finished things with a rare two-pointer in the last second.