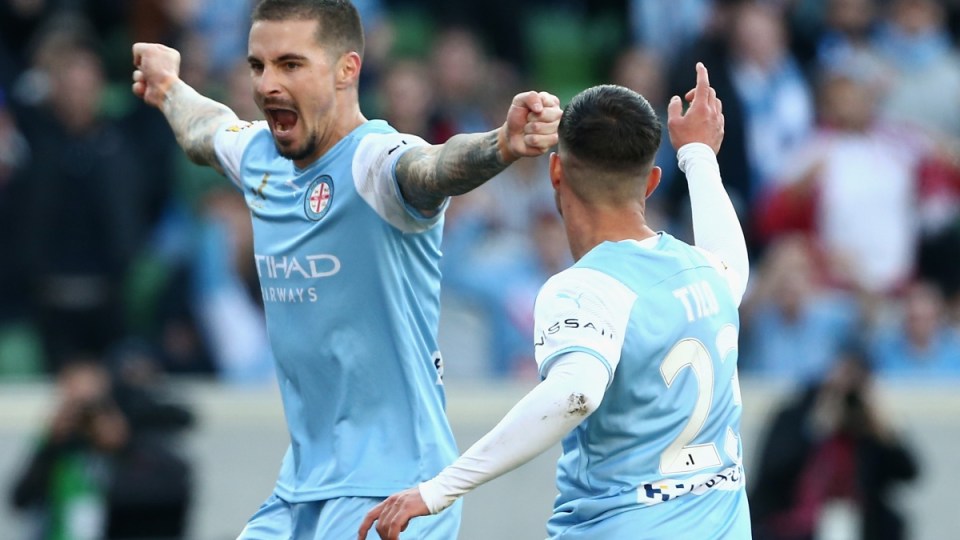 Jamie Maclaren and Marco Tilio both scored as Melbourne City advanced to the grand final on Sunday. Photo: AAP

Melbourne City is one win away from becoming the first team to complete consecutive A-League Men premiership-championship doubles and star striker Jamie Maclaren says it would cap off a dynasty.

It will be the first all-Melbourne national league grand final since 1998.

Scores were locked at 0-0 after Wednesday’s first leg at Coopers Stadium and Zach Clough’s wonderful 48th-minute dink put Adelaide in front at AAMI Park, before Marco Tilio equalised in the 74th to take the game to extra time.

Is the Golden Boot winner right? 🤔

Then Maclaren’s strike put City on the verge of league history.

“It (another double) would be huge. That’s probably what we set out (to do) ever since Erick Mombaerts joined the club and obviously PK (coach Patrick Kisnorbo) took the helm after Erick,” Maclaren told reporters.

“When I joined this club, Melbourne City was a mid-table team and ever since … we’ve just really turned it into a dynasty.

“All the boys are hungry. When you’ve got a hungry group who believe in our structure and the way we want to play and we know that we’ve got the backing of everyone.

“We just fight for each other and you saw today we were 1-0 down and probably everyone thought Adelaide were going to run away with it.

“But we didn’t think so and here we are going into a grand final.”

It was City’s first victory over a top-four team from 11 attempts this season and Kisnorbo delighted in the fightback.

“For me it’s the character that we showed today for 120 minutes,” Kisnorbo said.

“There are two ways (it can go after conceding), you either collapse and let just things be or show fight and I think we did that.”

Tilio’s back-post header kept the game alive then two minutes into extra time, Maclaren held up the ball for Connor Metcalfe and while Michael Jakobsen got in the way of the midfielder’s shot, he didn’t properly clear it.

The shallow clearance fell straight to Maclaren, who buried his 16th goal of the season at the near post to seal the grand final berth.

Can @AdelaideUnited find a way back?!

Catch all the action LIVE on @Channel10AU 📺

“I just had to be alert. I made sure that if there ever was going to be a mistake, it would fall in my path and up to me to bury it,” Maclaren said.

“I couldn’t be more proud of the boys, they gave everything tonight,” coach Carl Veart said.

“It’s been a long season and I think in the end we just ran out of petrol.

“We had some good opportunities in the game to kill it off but that’s football.”

Catch all the action LIVE NOW on @Channel10AU 📺