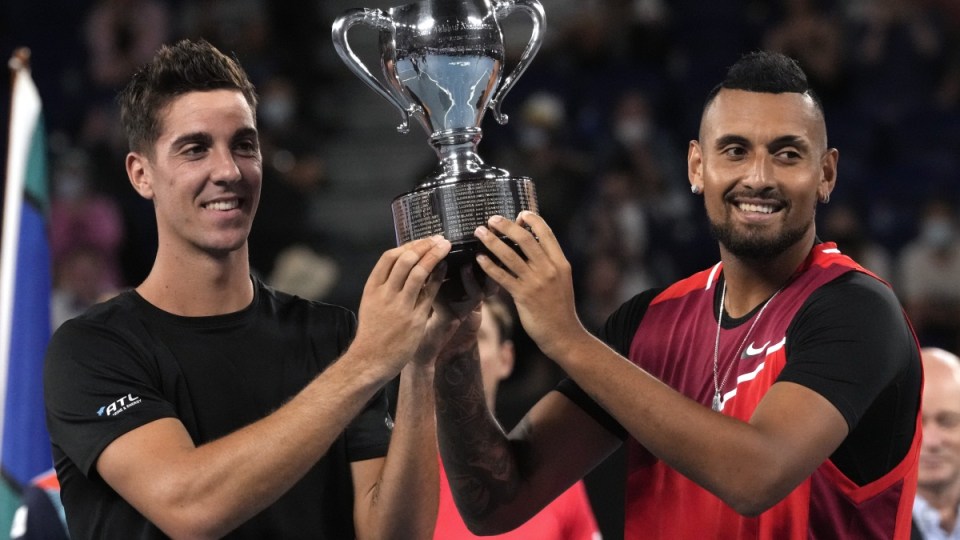 Thanasi Kokkinakis is hopeful his show-stopping double act with Nick Kyrgios will soon be wowing Wimbledon.

Kokkinakis, the Adelaide half of the ‘Special Ks’, reckons it would be fun to team up with his buddy again for a shot at the grass-court grand slam after collecting their first major at the Australian Open in January.

The pair won’t be teaming up at the French Open again over the next fortnight because Kyrgios has given the clay court grind a miss while Kokkinakis attempts to keep his excellent 2022 singles revival rolling.

“So we won’t be playing at Roland Garros, but we’ll see what happens at Wimbledon – I’m hoping to play with Nick at Wimbledon,” Kokkinakis told AAP from the Geneva Open, where he’s enjoyed another impressive week before travelling to Paris.

“And, hopefully, we can also play some Masters at the back end of the year. That should be fun.

“We’ll just play it by ear. It’s definitely not our focus, but we’ll play doubles where we can.

“We’re both singles players who happen to have had a couple good weeks in doubles, so we’ll see what happens.”

So far, the double act has proved both fruitful, not just for them but for the crowds. At the Australian Open, their triumph was the perfect, noisy accompaniment to the singles heroics of women’s winner Ash Barty and wheelchair runner-up Dylan Alcott.

But their victory in Melbourne has been followed by two more impressive outings in the US, where they reached the last 16 in Indian Wells and the semi-finals in Miami.

They’ve only played three tournaments but are currently second in the race to earn a place in the ATP finals in Turin.

The chance of winning another title at Wimbledon, nine years since the pair won the boys’ doubles together, might prove an irresistible challenge for Kyrgios.

After their dizzy Australian Open win, he was so enthused by the whole occasion that he said: “I have won some big titles around the world, played some amazing matches – but this one ranks No.1 for me.”

Kyrgios and Kokkinakis were the first Australian men’s duo to win at Melbourne Park since the Woodies – Mark Woodforde and Todd Woodbridge – back in 1997.

No Australian men’s pairing have won the senior Wimbledon crown since the Woodies back in 2000.