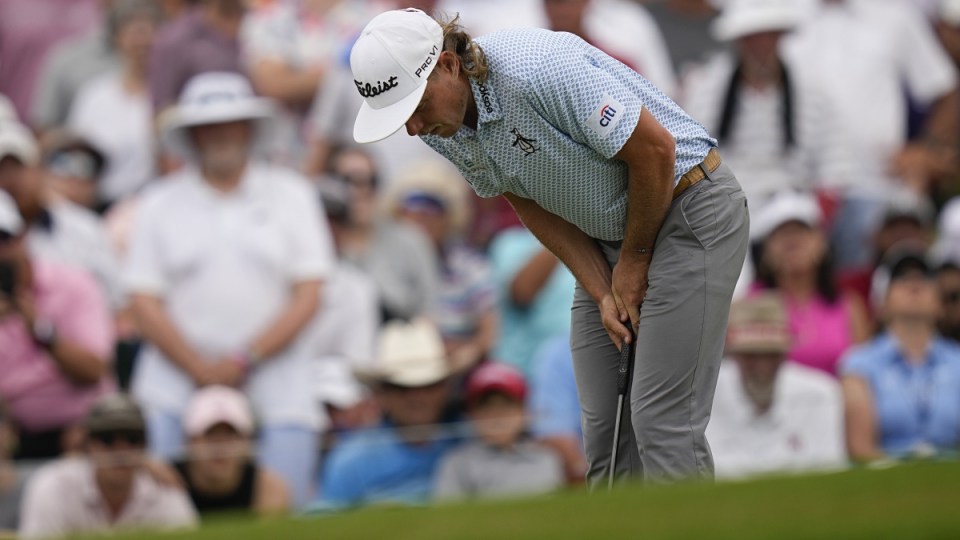 Cameron Smith played plenty of good shots only to see his round get lost in the rough. Photo: Getty Photo: AP

Cameron Smith has let the leaders slip away in an opportunity lost at the US PGA Championship in Oklahoma.

Smith remains an outside chance but will need to defy history after labouring to a second-round even-par 70 at Southern Hills Country Club.

Australia’s world No.4 is two under for the championship, seven shots adrift of American pacesetter Will Zalatoris, after failing to take advantage of a favourable change in conditions.

As his rivals cashed in on a dramatic wind shift mid-round with a barrage of birdies, Smith went backwards with two bogeys on his homeward nine to leave himself playing catch-up over the weekend.

Mito Pereira is one off the lead after shooting an incredible 6-under, 64. Watch the highlights from his round.#PGAChamp | @ROLEX pic.twitter.com/bbNyRK97jA

That scenario looked unlikely after The Players champion birdied his opening hole, burnt the lip with several other chances and then picked up another shot on the ninth to move to within two strokes of the lead.

But bogeys on the 10th, when he missed the green left, and on No.15, after leaving his bunker shot in the trap, sent Smith tumbling from fifth into a logjam of players sharing ninth spot.

History favours the frontrunners at Southern Hills, with all seven winners of the previous seven PGA Championships played at the venue having at least a share of the 36-hole lead.

That leaves Zalatoris in the box seat to hoist the Wanamaker Trophy on Sunday after the 2021 Masters runner-up shot to nine under with a sizzling 65.

What a round for Will Zalatoris who carded a 65 for Round 2. Check out the highlights⤵️#PGAChamp | @ROLEX pic.twitter.com/kTxwbYPamf

Chilean Mito Pereira (64) is one shot behind after missing a short birdie putt on the last to tie the course record jointly held by Tiger Woods and Raymond Floyd.

Chasing a second PGA Championship triumph, Justin Thomas is third at six under after posting a successive 67, this time in the fierce morning winds.

Smith’s fellow Australians Lucas Herbert, Jason Day and Marc Leishman also made the halfway cut but will be making up the numbers.

Herbert also lost ground on Friday, falling to one over for the championship with a three-over 73.

Day, champion in 2015 and runner-up in 2016, fought hard to pull back to even with the card, only to finish his second-round 72 with three straight bogeys to slip to three over – a dozen strokes adrift of Zalatori.

Leishman (71) is also three over, while Cam Davis (72) birdied his last two holes to make the cut on the number at four over.