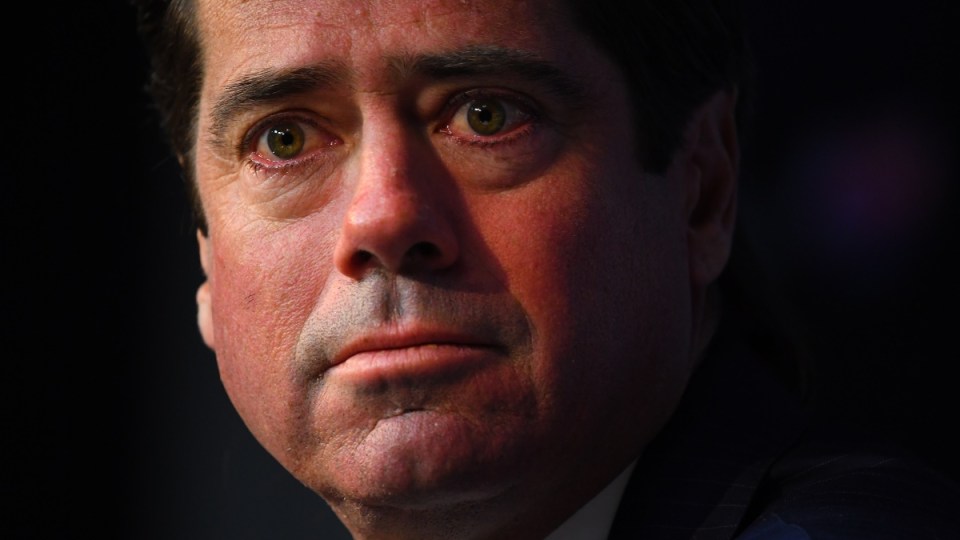 AFL CEO Gillon McLachlan says the grand final will either be an afternoon or twilight match. Photo: AAP

AFL chief executive Gillon McLachlan says the emotive issue of what time to play the grand final rests on a basic question.

“The simple discussion is what is the best presentation of the game,” McLachlan told reporters in Adelaide on Monday.

The AFL commission will soon have that discussion, with McLachlan ruling out a night grand final.

The premiership decider will return to Melbourne’s MCG this year after being played in Perth last season and Brisbane the year prior because of COVID-19 impacts.

Will they still be there at the end of 2022? pic.twitter.com/o0kFWlDjyC

“We won’t be going to night. It will be a twilight or a day (grand final),” McLachlan said.

“And on the other side (of the debate) … over 100 years we have been playing at 2pm-something. And we respect that people like their rituals and the traditions.

“So it’s, is the game presented better for the biggest game of the year (at twilight) … as opposed to people at the core of our game, a lot of people like the tradition of 2.30pm.

“So that is the harder discussion. It will be a really good discussion and clearly I am not going to discuss it here in advance of the commission meeting.

“But I want to acknowledge to all of our supporters, we understand that a lot of people don’t want it to change.

“But also when you look at how it has been presented the last couple of years, there’s also a lot of people who really like the twilight and think it presents well.”

McLachlan also dismissed controversy over the AFL’s crackdown on umpire dissent as “overblown”.

“We flagged it was going to be some issues when you basically make a significant change – and that is what it was,” he said.

“But the clear mandate for the rule, I think everyone believes in. And then you have actually got to execute it.

“And I actually believe it’s pretty easy: Get on with it, stop complaining, the umpire is not going to change his decision.

“The concept … that we’re an emotional game so you have to dispute a decision, I don’t agree with.”

McLachlan praised players for adapting to the dissent crackdown.

“I know there are still outliers, but each week it has got better and I don’t really think it’s much of an issue,” he said.

“Players are generally doing a hell of a job playing football and getting on with it much better.

“And it’s having a huge impact at community football.”