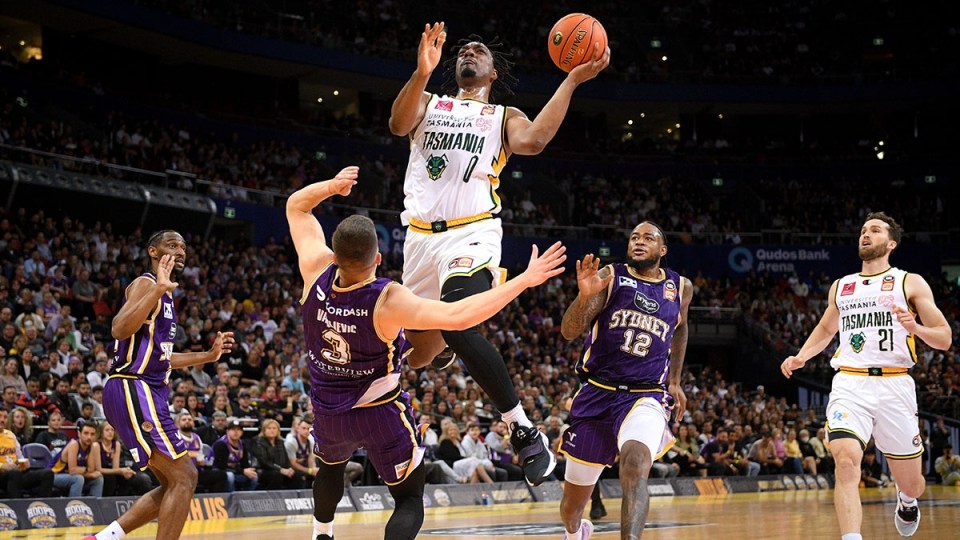 MiKyle McIntosh drives to the basket but couldn't stop the Kings from being crowned NBL champions. Photo: AAP

Sydney Kings have won their first NBL title in 17 years, scoring a 97-88 home win over Tasmania JackJumpers to sweep the newcomers 3-0 in the best-of-five series.

Watched by a NBL grand-final record attendance of 16,149 at Qudos Bank Arena on Wednesday, Sydney trailed after the first three quarters but never by more than eight, with the JackJumpers’ Josh Adams hitting a game-high 27.

Front-court stars Xavier Cooks (23 points and 13 boards) and Jarell Martin (22 and 16) had double doubles for Sydney, with former NBA champion Ian Clark scoring 11 of his 22 points in the fourth quarter.

A GRAND CROWD FOR A GRAND FINAL

Tonight's crowd of 16,149 is the BIGGEST crowd EVER for an NBL Grand Final game and the third biggest crowd in NBL history 👀#NBL22 LIVE & FREE on ESPN via Kayo Freebies 👀 pic.twitter.com/dtY2pdfYI4

Captain Cooks won the Larry Sengstock Medal for most valuable player in the grand-final series.

Feisty to the end, the JackJumpers fought hard after starters Fabijan Krslovic and Jack McVeigh were ruled out because of flu.

The Kings dominated the boards, winning 49-35, and Tasmania made just three turnovers.

The JackJumpers got off to a fast start to lead 8-2 with Adams hitting two three-pointers and Sydney missing their first three field-goal attempts.

Sydney’s game-two hero Dejan Vasiljevic was well off target early on with a three-point attempt and hit just two from 11 from the field.

However, Cooks and Martin dominated down low and Clark put the game beyond the JackJumpers reach.

The JackJumpers led 25-22 at quarter time despite being out-rebounded 14-4.

Coming off the bench, Kings centre Makur Maker bagged seven points and three boards in under five minutes in the first quarter, but Sydney turned the ball over five times to Tasmania’s none in the opening term.

Sydney edged ahead 34-30 in the second quarter, but the JackJumpers hit four straight three-pointers to open up an eight-point lead.

Two more triples from Jock Perry, who was elevated into the rotation after the late withdrawals, kept the visitors ahead but the dogged Kings closed to within a point at halftime.

Adams had 13 by halftime while Cooks and Martin had the same for Sydney.

Cooks made all five of his first-half shots and Martin missed just one of six from the field.

Huge shout out to Fleur McIntyre on becoming the first female to win an NBL championship ring 💍#NBL22 pic.twitter.com/l6SlYTIubh

The lead changed numerous times in the third quarter, which ended with Tasmania ahead by three.

The Kings dominated the last quarter 31-19 to end the JackJumpers’ fairytale.