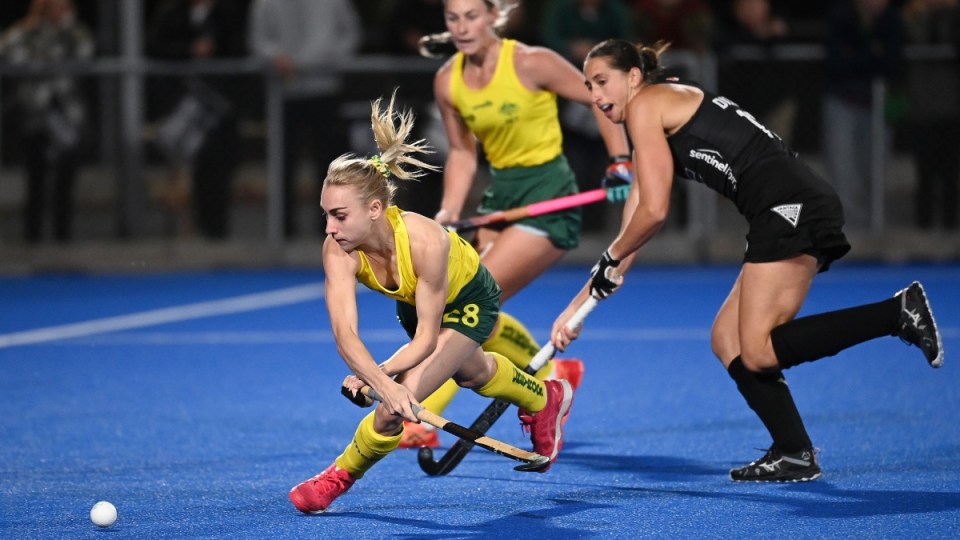 Hannah Callum-Sanders goes on the attack for the Hockeyroos in their 2-2 draw against New Zealand. Photo: AAP

A young and inexperienced Hockeyroos outfit fought back from two goals down to draw 2-2 with New Zealand in the opening match of their trans-Tasman series in Auckland.

The Black Sticks led 2-0 heading into the last quarter but two goals in as many minutes from seasoned campaigners Maddy Fitzpatrick and Mariah Williams gave the visitors a share of the spoils in their first international match in more than nine months.

Claire Colwill, Hattie Shand, Shanea Tonkin and Hannah Cullum-Sanders all made their Hockeyroos debut, while Rebecca Greiner played her first Hockeyroos match since 2019.

Aside from veterans Jane Claxton and Brooke Peris, the Hockeyroos team included 10 players with U20 international experience.

Match Report | A youthful and largely inexperienced Hockeyroos outfit has fought back from two goals down to draw 2-2 with the Black Sticks in the opening match of the 4-match Trans-Tasman Series in Auckland.

The Hockeyroos were unlucky not to go ahead in the first quarter with Rosie Malone and Tonkin denied only by the agility of Black Sticks goalkeeper Grace O’Hanlon.

O’Hanlon also came to the hosts’ rescue with a smart double save from a Hockeyroos penalty corner.

Hockeyroos No.1 Jocelyn Bartram was not to be outdone and  produced some important saves herself to foil the hosts.

A minute into the second quarter, NZ capitalised on a penalty corner to take the lead.

Bartram did well to stop the initial drag flick but Rose Tynan was first to the rebound and poked the ball over the line in her debut.

But Shannon was not to be denied in the 42nd minute when she fired past Bartram for a 2-0 lead.

The Hockeyroos pressed and were rewarded for their intent when Fitzpatrick beat O’Hanlon with a well-executed drag flick.

A minute later the Hockeyroos were awarded a penalty stroke that Williams duly converted by lifting it into the top corner to draw level.

The result made it five draws between the teams from their past eight meetings.

Hear what Jane Claxton and Brooke Peris had to say to the local media in Auckland on the eve of tonight's Trans-Tasman series opener.

Hockeyroos coach Katrina Powell was encouraged by the result.

“I think our performance was a little bit scratchy and looked a little bit inexperienced … that’s probably what you’d expect after not playing for so long,” said Powell.

“But to bring in four debutantes and finally get to play again, drawing against New Zealand tonight isn’t a bad thing.

“We got plenty of outcomes in the attacking circle … not goals but we haven’t won that many penalty corners in a game for a long time so that was pleasing.”

Match two of the four-match series is on Thursday at 5.05pm AEST.

Hockeyroos fight back to draw 2-2 with New Zealand