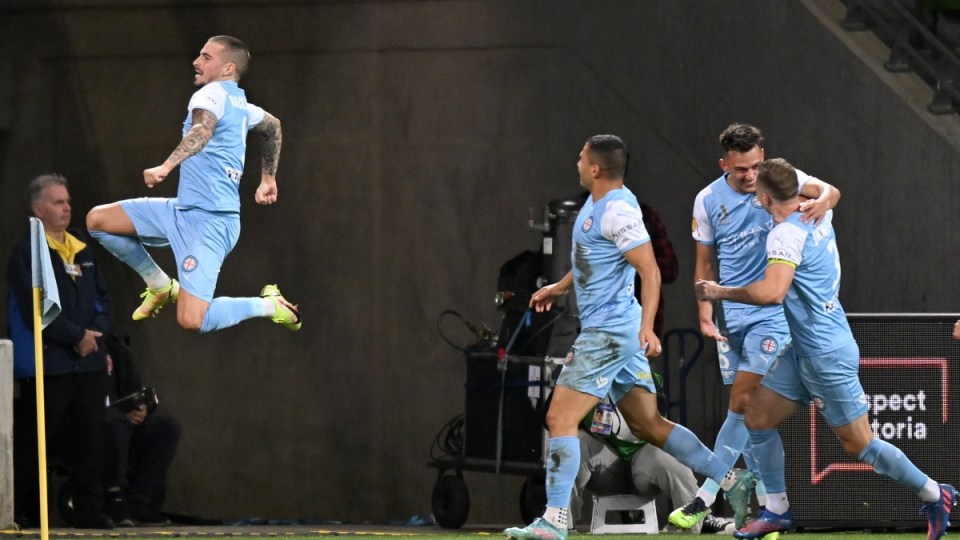 Melbourne City has claimed the A-League Men premiership for a second consecutive season, beating an understrength Wellington Phoenix 2-1 to clinch the plate ahead of rivals Melbourne Victory.

Reigning champions City became the second ALM team after Sydney FC (2016-17 and 2017-18) to win consecutive premierships and will now attempt to become the first to complete back-to-back doubles with another grand final triumph.

City entered the game on 46 points, two behind Victory, knowing only a win would seal silverware.

A couple of hundred Victory fans packed the north end of AAMI Park on Monday night to support Wellington and boo City, but they were silenced after just three minutes when Sam Sutton scored an own goal, with Jamie Maclaren adding City’s second in the 10th minute.

Ben Waine sparked the game to life by scoring in the 54th minute but City hung on to finish top by a point.

Wellington, which couldn’t finish above sixth, was understrength, clearly with an eye to Saturday’s away elimination final against Western United.

Gael Sandoval and David Ball were rested while Reno Piscopo started on the bench, with youngsters Riley Bidois and Jackson Manuel making their first starts.

City was full strength except Curtis Good (suspension) and his replacement Taras Gomulka had a hand in both goals.

It's taken less than three minutes to hit the front! 👊

Is that the Premiers Plate decided already?!

In the third minute, Gomulka swung in a corner and Sutton flick-headed it over Oli Sail and into his own net.

With his 15th goal of the season, Maclaren wrapped up a third straight golden boot, and the fourth of his career.

City had multiple chances to extend its lead, including Maclaren smacking the post in the 42nd minute.

Ufuk Talay turned to Piscopo and Clayton Lewis at half-time and they proved game changing.

Nine minutes after the restart, Gary Hooper lofted the ball to Waine, who took a couple of lovely touches then dragged the ball across his body into the far corner.

Are we set for yet ANOTHER twist in the Premiers Plate tale?!

Wellington had a chance to equalise when Lewis put a free kick on target in the 88th minute but after a nervous double-grab, Tom Glover made the save to preserve City’s lead.

City and Victory now have the week off before next week’s two-leg semi-finals.