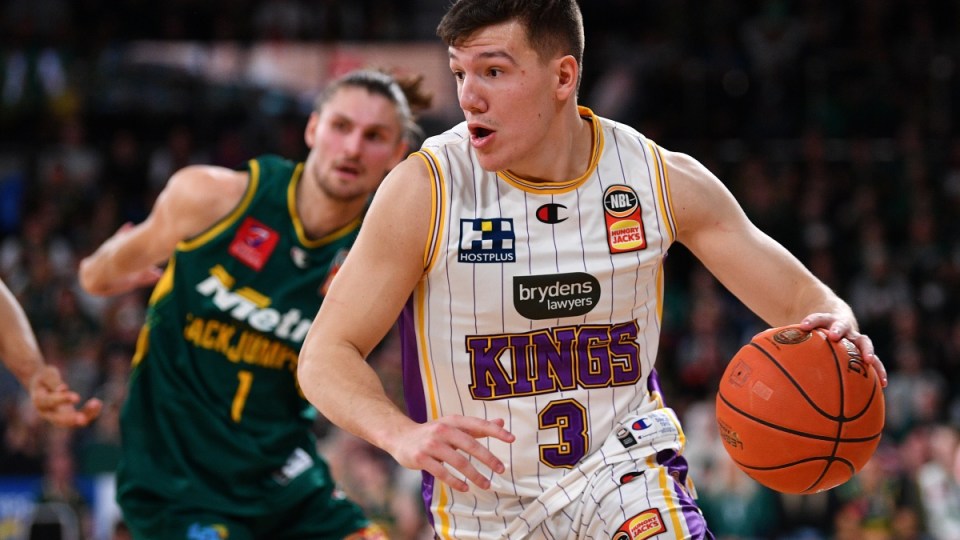 Dejan Vasiljevic has put Sydney Kings within one win of a grand final triumph. Photo: AAP

Sydney is one win away from its first NBL championship since 2005 after toppling Tasmania 90-86 in a nail-biting game two of the grand final series.

The Kings, without competition MVP Jaylen Adams who suffered a hamstring injury in game one, came back from a 10-point, first-quarter deficit.

Sydney captain Xavier Cooks (20 points) stood up late, with 11 points in a fourth quarter that went tit for tat.

JackJumpers’ American guard Josh Adams, who had a game-high 36 points, nailed two three pointers under pressure late to keep his side within touching distance.

But Dejan Vasiljevic (20 points) slotted a three-pointer of his own with 10 seconds on the clock for the final margin.

The Kings have a 2-0 advantage over the JackJumpers, who are in their debut season, in a best-of-five finals series before Wednesday night’s third game in Sydney.

Cooks also picked up an equal game-high 10 rebounds and two assists in a stand-out performance.

Jarell Martin shot at 80 per cent from the field and also picked up 20 points for the Kings.

In front of a capacity crowd of 4865 at MyState Bank Arena in Hobart, Adams started on fire for Tasmania, shrugging off a glancing blow to his arm to post 10 points for the opening quarter.

Tasmania made the most of 10 trips to the free throw line, picking up eight points, to take a 27-17 lead at the first break.

Vasiljevic came to life for Sydney as the Kings surged back into the contest with a run of 14 points early in the second before Tasmania’s Jarrad Weeks hit eight points for 48-44 lead at half-time.

Tasmania took a 70-68 lead into the final quarter.

Sydney coach Chase Buford lost his temper over a call in the third quarter, appearing to put a dint in courtside signage with a kick.

Michael Pascoe: A grand housing alliance looms at last – if our new PM has the will
Ben Simmons to undergo back surgery
Today's Stories