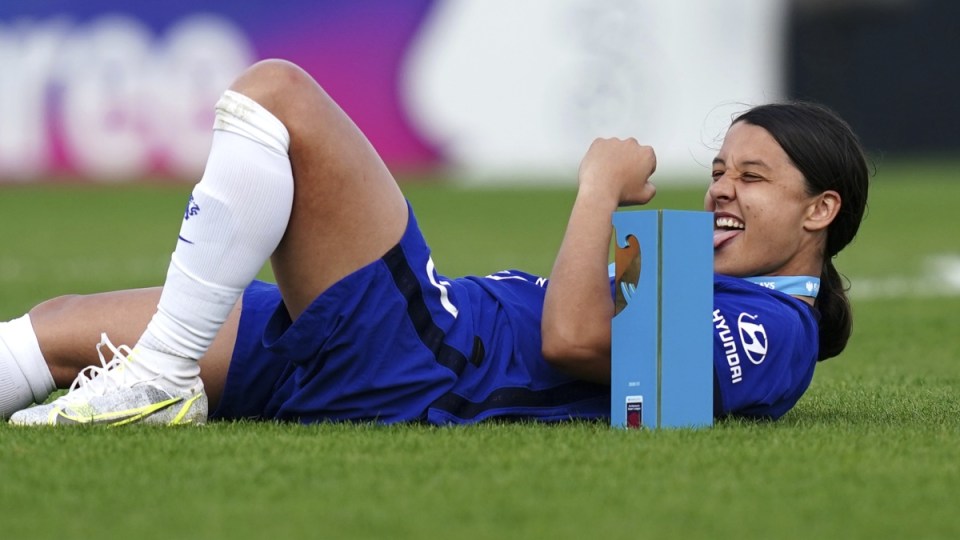 Sam Kerr has put the seal on a landmark week by scoring two extraordinary goals to power Chelsea to a third consecutive Women’s Super League title.

With her side 2-1 down and their title hopes in serious jeopardy, the Australian captain blasted home a crucial volleyed equaliser at the start of the second half to launch a brilliant 4-2 comeback win over Manchester United on Sunday.

But that was just the warm-up act before Kerr provided an astonishing piece of skill in the 66th minute, taking the ball on her chest and swivelling instantly to hit a remarkable looped volley for her 20th – and best – WSL goal of the season.

It capped a fantastic week for the Matildas striker, who’d been crowned the English football writers’ women’s player of the year on Thursday.

IT JUST HAD TO BE! Sam Kerr puts Chelsea back on top of the league with a 𝒔𝒕𝒖𝒏𝒏𝒆𝒓! 🔥🇦🇺

The Blues are on track to win the league on the final day!

Her special strikes, which saw her crowned the player of the match, also ensured she landed the Golden Boot for the WSL’s top scorer for the second successive season.

But Chelsea’s win spelt only heartbreak for three other Matildas, who had been hoping to lift the title with the Blues’ London rivals Arsenal on the final day of the season.

SAM KERR ALL-BUT WINS THE LEAGUE FOR CHELSEA ON THE FINAL DAY WITH A WORLDIE! 😱

Yet, agonisingly for Arsenal, its win still left the Gunners one point behind Chelsea, which lifted its fourth title in five years.

Player of the match and Golden Boot winner Sam Kerr talks through her STUNNING goals today and what it means to be Champions again 🔵🔥 pic.twitter.com/oVAeUlWId1