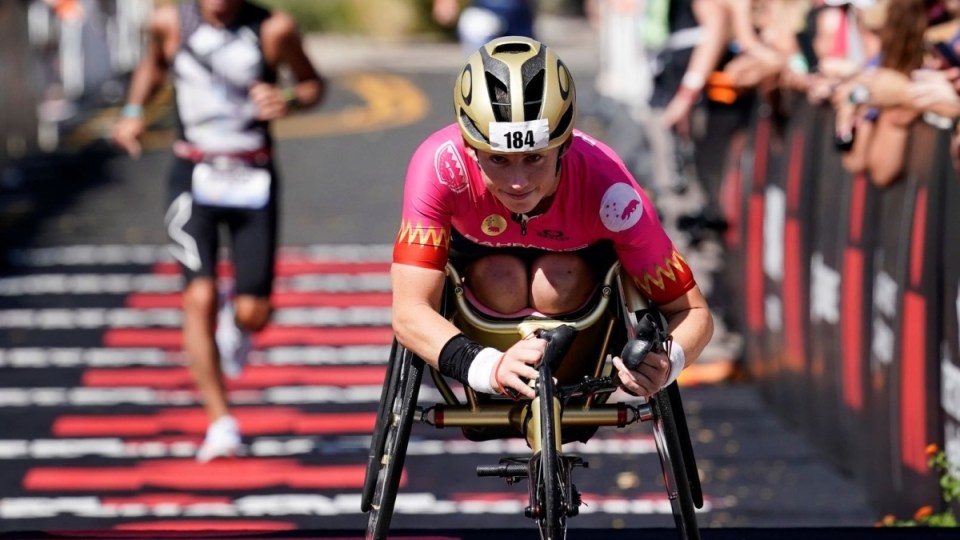 Australian Lauren Parker has made a successful return to the Ironman triathlon world championships with a history-making finish in the handcycle division.

She is only the third woman and the first Australian to finish the Ironman world championships in the handcycle category.

Parker, who won silver in triathlon at last year’s Tokyo Paralympics, also posted the fastest handcycle time by a woman at the world championships.

She is amazing. @_laurenparker_ just finished her first full Ironman since becoming paralyzed on April 18th 2017, and broke the world record – on the brutal St George course – finishing in 14:00:47. #TeamCAF #IMWC pic.twitter.com/lC5qbKFPNi

Australian John Maclean was the first triathlete to finish the Ironman world championships as a handcycle entrant in 1995.

“It was a really tough day out, one of the toughest I’ve ever had in my life,” Parker said.

Her finish comes a fortnight after she accused Triathlon Australia of costing her a gold medal at the Tokyo Paralympics, a claim the governing body denies.

The COVID-19 pandemic forced the 2021 world championships to be delayed and moved from their home of Kona, Hawaii to St George.

The 2022 championships will return to Kona in October for the first time since 2019.

Parker had finished Hawaii as a top age-group competitor and was preparing for the 2017 race when she suffered serious injuries in a training accident.

She returned to competition within months as a paratriathlete and won bronze at the 2018 Commonwealth Games.

This is Parker’s first Ironman finish as a handcycle competitor and she now plans to return to Kona at the October world championships.

“One hundred per cent, that’s what I’ve been waiting for since my accident is Kona … that’s where my heart is,” Parker said.

“I did it twice as an able-bodied athlete and I can’t wait to get back there as a para athlete and see what I can do.”

Professional cyclist Cameron Wurf finished 18th, three weeks after he rode the Paris-Roubaix monument as a domestique in the Ineos Grenadiers team.

Renee Kiley was 14th among the elite women, while Matt Burton and Max Neumann were listed on the race website as not finishing.