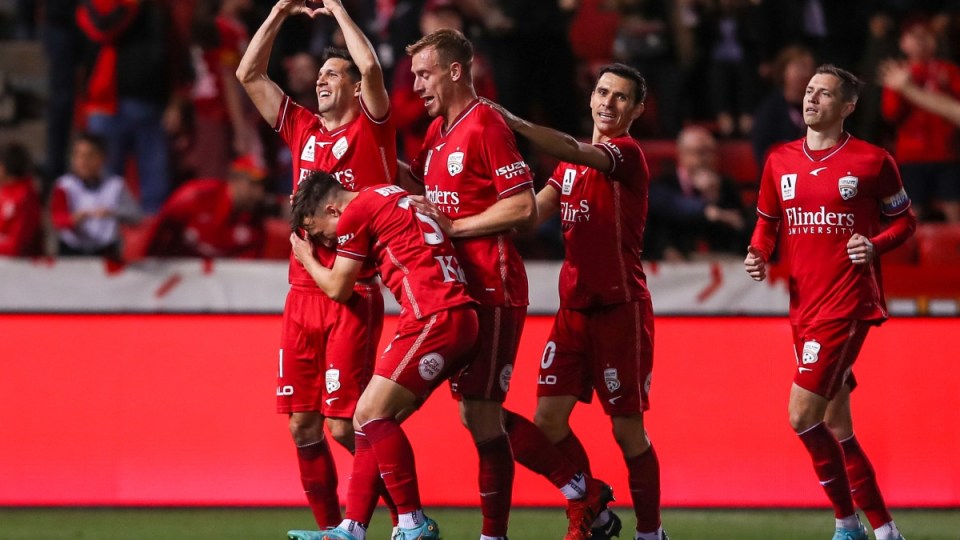 Adelaide United has booked itself a home final next Sunday with an impressive 2-1 win over Western United at Coopers Stadium.

The Reds were made to come from behind after an early goal from the visitors, but locked down fourth place on the A-League Men table with the victory.

United’s opponents look all but confirmed with Central Coast occupying fifth spot, three points clear of Wellington Phoenix – which meets Melbourne City in their final regular-season match on Monday – and with a far superior goal difference.

Western United made a blistering start, attacking the Reds from the outset and breaking the deadlock after just six minutes.

Adelaide was dispossessed in the middle of the park and Lachie Wales tore down the right flank unchallenged before supplying a short cut back for Dylan Wenzel Halls, who tapped into an unguarded net from close range.

The home side equalised on 14 minutes, thanks to a delightful strike from full back Javi Lopez.

Craig Goodwin crossed to the back post where Bernardo controlled and laid off for Lopez on the edge of the area. He curled his shot over goalkeeper Jamie Young into the far corner.

Western almost punished the Reds on 25 minutes after some sloppy playing out from the back.

Connor Pain stole the ball and drove towards goal, cutting back for Aleksandar Prijovic, who forced Joe Gauci into a brilliant double save from point-blank range.

The Reds had a great chance just before the break when Goodwin and Ryan Kitto combined on the left with the latter supplying a dangerous cross for George Blackwood, but his diving header was kept out by Young.

On 50 minutes, Adelaide found themselves in front thanks to a superb strike from Kitto.

The full back drove towards goal before cutting inside and unleashing a curler from outside the area that nestled into the inner side of the net.

The visitors should have equalised just after the hour when, again, sloppy play in defence almost cost Adelaide a goal.

Prijovic received the ball outside the box, took a touch and powered a shot towards goal but Gauci produced a stunning save, scrambling back into position and tipping the ball around the post.

A minute later and the Reds wasted a chance to extend their lead.

Substitute Zach Clough teed up Blackwood who shot on the turn from 12 yards but again Young was  equal to the task.

Clough was involved again soon after this time crossing for fellow substitute Lachlan Brook, but he blazed over from 10 metres.

As the clock wound down, Japanese striker Hiroshi Ibusuki came off the bench to find a sealer for the Reds and almost succeeded, forcing another impressive save from Young in injury time.