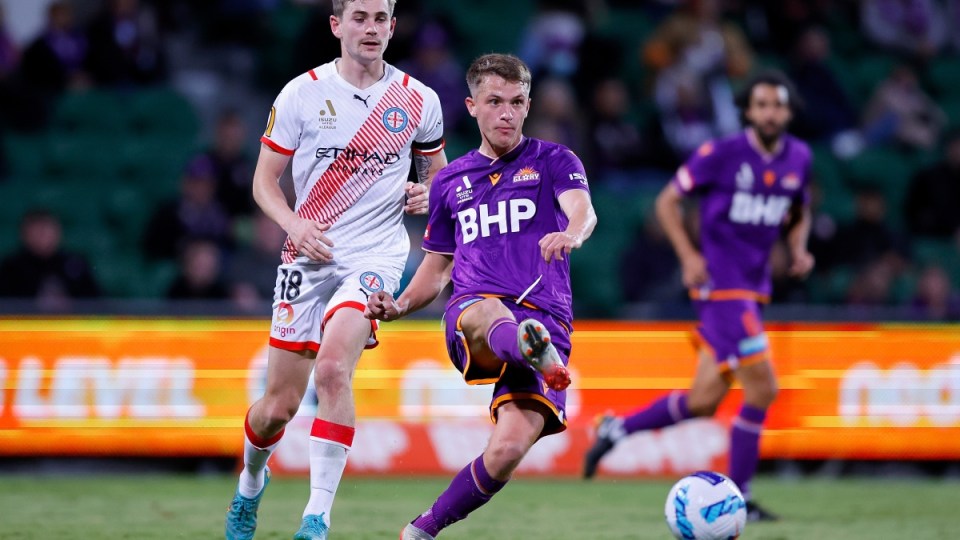 Melbourne City has thrown away a golden opportunity to clinch a second A-League Men premiership, stunned 2-0 by wooden spooners Perth Glory to keep Melbourne Victory and Western United in the hunt for top spot.

A win would have delivered City’s second premiers plate in as many seasons, after Western United slipped to a 1-1 draw with Newcastle.

But City was left shellshocked on Wednesday when Callum Timmins handed Glory the lead with a wonderful, dipping long-range strike in the fifth minute.

He then doubled it with a skidding effort, helped by a fumble from City goalkeeper Tom Glover, in the 67th minute, to snap Perth’s 16-game winless run and end their tough season on a high.

And what a hit it was!

City’s night was further soured when Curtis Good was sent off in the 94th minute.

The reigning champions City, on 46 points, are just a point and goal difference ahead of Victory and United before the final round.

It will have to wait for Victory to play Sydney on Saturday and United to face Adelaide on Sunday before facing Wellington on Monday.

City was coming off its Asian Champions League group stage exit, having flown to Perth directly from Thailand.

Liam Reddy with a HUGE save 🔥

The @PerthGloryFC custodian did everything to ensure his side went to the sheds in front!

Catch the second half LIVE on @ParamountPlusAU 📺

They looked understandably flat early and when Antonee Burke-Gilroy burst down the right then cut the ball back for Timmins, the 22-year-old pulled off a wonderful finish to deliver an unexpected lead.

From there, City peppered the Glory goal without reward.

In the 37th minute, Jamie Maclaren smacked a strike into the far post, while Liam Reddy pulled off a big save to deny Rostyn Griffiths just before half-time.

Mat Leckie burst past Osama Malik in the 62nd minute and lashed a strike off the crossbar, while Maclaren headed wide in the 64th.

It's TWO for @PerthGloryFC 🤯

Tonight's opportunity to seal the Premiers Plate is well and truly slipping away from @MelbourneCity!

City goalkeeper Tom Glover got down low to the ball and should have saved it but somehow let it slip through his fingers for Perth’s second.

Glory hung on from there for a memorable victory, with Good sent off in the dying moments for a second yellow card offence.