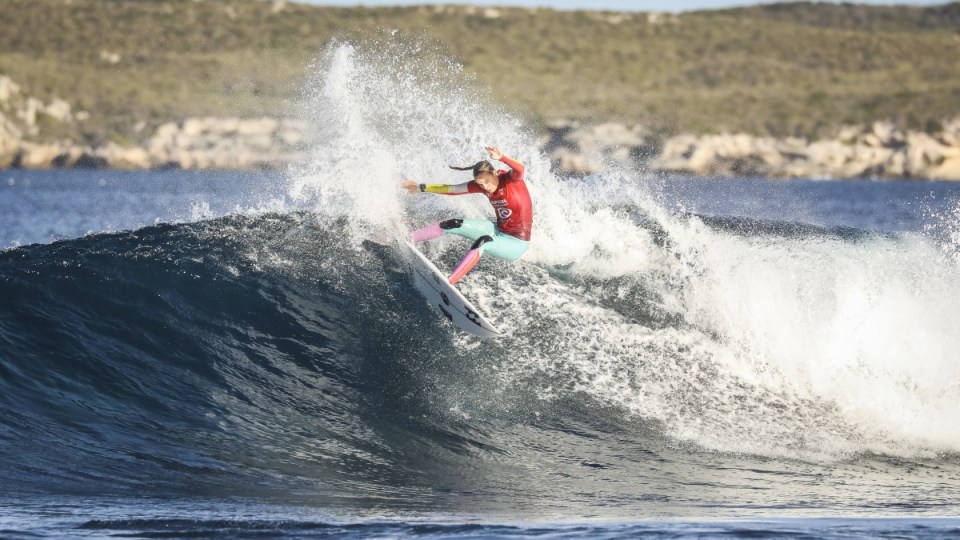 Queenslander Isabella Nichols has broken down in tears after avoiding the dreaded WSL mid-season cut by winning the Margaret River Pro.

Nichols entered the fifth stop on tour ranked 13th in the world and needed to win the WA surf event to sneak into the top 10 and avoid the axe.

The 24-year-old knocked off Lakey Peterson, Johanne Defay and Bronte Macaulay to seal a spot in Wednesday’s decider, and she was too good for Hawaiian Gabriela Bryan in the final to seal her maiden Championship Tour title.

Nichols’ emotions spilled over as she hugged her team on the shore afterwards.

Congratulations Isabella Nichols on your maiden Championship Tour victory and securing your spot above the mid-season cut!@WestAustralia pic.twitter.com/WTF07egLUU

“I don’t feel like this moment is real right now,” Nichols said.

“I’ve dreamt about this my whole life. I feel like I’m still in bed at home asleep. It will take me a while to digest.

“There is no better feeling than this in the whole world. I just had fun. I know it sounds super corny.”

The victory has seen Nichols rocket up the standings, putting her in the hunt for a top-five finish and a spot in the end-of-season finals.

It’s a far cry from just a few hours earlier when she was facing elimination from the tour.

“Only this morning was I thinking about falling off tour. Now it’s (about making the) final five – the goals change,” she said.

But she was no match for Nichols, who pulled off a two-scoring total of 15.93 on Wednesday to secure a spot in the final.

Bryan’s semi-final against American Courtney Conlogue was decided after the final hooter after both surfers pulled off big rides at the death.

It meant Conlogue needed the judges to give her a 7.91 or higher for her final wave, but she fell 0.31 short.

Bryan would have been axed from the rest of this year’s tour if she had lost the semi, but her win means she has now secured a spot in the top 10.