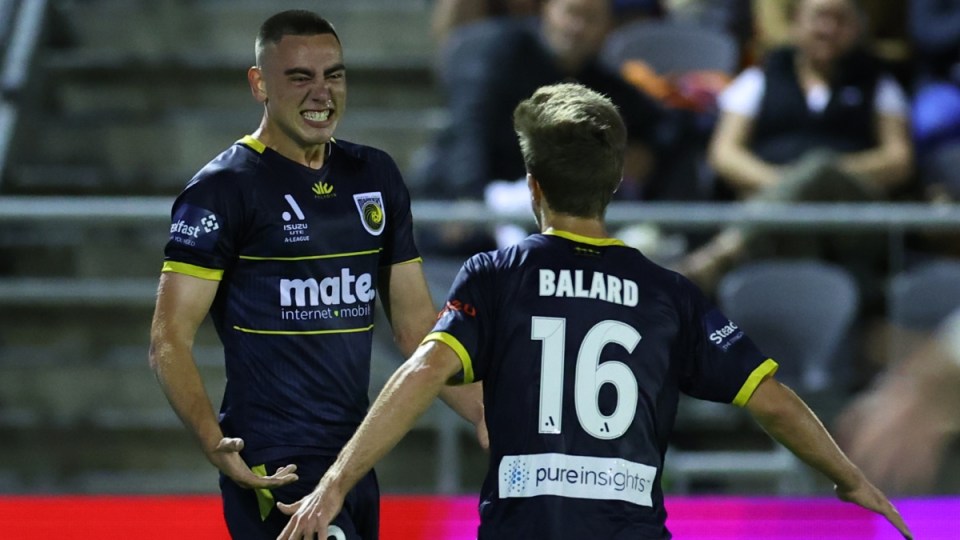 Kuol came off the bench to score his fourth goal in seven ALM appearances after Lewis Miller opened the scoring for the visitors at Moreton Daily Stadium on Tuesday night.

The win, Central Coast’s fourth in a row, locks in their finals spot ahead of this weekend’s final home-and-away fixture against local rivals Newcastle.

“We set ourselves a target at the start the year with the group and that was to get as far as we could in the FFA Cup and we made the final … but also to get in the top six,” Mariners coach Nick Montgomery said.

“Everybody wrote us off at the start of the year before we even kicked the ball.

“We lost Matty Simon, lost Alou Kuol. It was virtually a new team this year bar one or two.

“I had full belief in the young boys that I’ve coached for the last couple of years. They’ve been the nucleus of the squad with a couple of experienced boys around them.

“I knew that I’d spent a couple of years building a foundation in the academy to develop players and, for me, I don’t see them as young players – they’re A-League players.”

.@CCMariners: Welcome to the finals 👊

Defeat for second-last Brisbane extends its winless run to six matches before its season finale against Sydney FC next Tuesday.

Roar started the brighter of the teams but it wasn’t until the 33rd minute that the first shot on target was recorded, a curling effort from Alex Parsons forcing impressive Mariners’ goalkeeper Mark Birighitti into a diving save.

But just as Roar was looking to make its dominance count it fell behind.

Cy Goddard’s turn and cross from the left found an unmarked Miller at the far post in the 40th minute and he headed past Jordan Holmes for his first ALM goal.

Brisbane turned to its bench at half-time, bringing on attacking duo Luke Ivanovic and Nikola Mileusnic.

Introduced in the 59th minute, 17-year-old Kuol took just four minutes to make his mark and seal the points for the Mariners.

“We’ve had our arse kicked all season in the big moments,” Roar coach Warren Moon said of Miller’s goal just before the break.

“We were quite solid in the first half. I don’t know if they even had a chance up until that point.

“We had moments going the other way. We weren’t brave enough. We weren’t clinical or aggressive enough for the chances we had and again a lapse in concentration.

“We didn’t track a runner and they punished us … we’re lacking in the key moments right now.”

The visitors suffered a setback in the 78th minute when defender Dan Hall limped off with a knee injury, reducing the Mariners to 10 men given they had used all of their substitutes.

Brisbane, however, was also down to 10 players just eight minutes later when Scott Neville was shown red for a challenge on Nicolai Muller, referee Tim Danaskos upgrading his original yellow card decision after a VAR review.