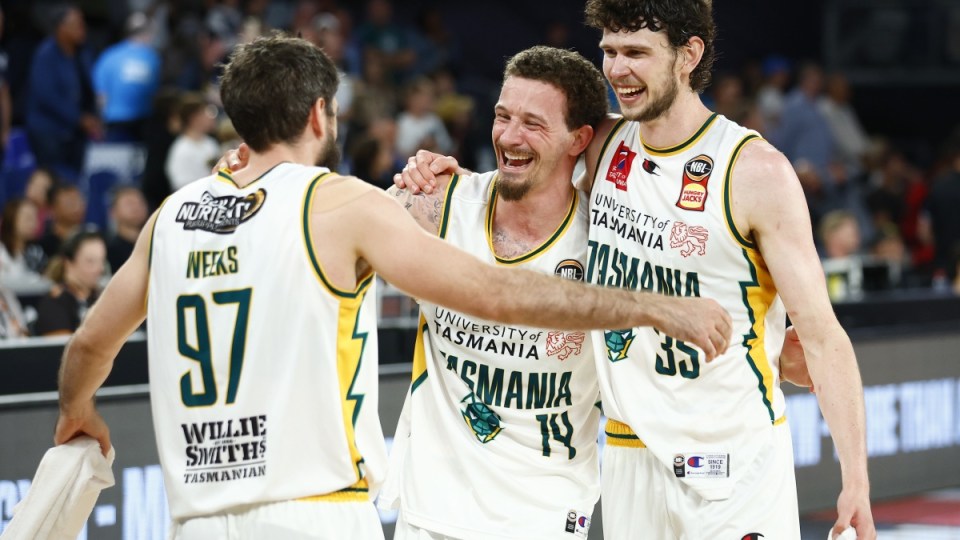 The fairytale debut season for Tasmania JackJumpers will continue after the first-year franchise qualified for the NBL grand final after stunning defending champions Melbourne United 76-73 in the deciding game of their best-of-three semi-final series.

Thanks to a dynamic performance from American import Josh Adams, the upstart JackJumpers held their nerve in the final minutes of Monday’s clash at John Cain Arena to set up a grand final showdown with Sydney Kings.

Adams led all scorers with 30 points and Jack McVeigh added 16 to help the JackJumpers become just the second Tasmanian team to play off for the championship following Launceston Casino City’s title run in 1981.

United was dealt a major blow prior to the match when inspirational leader Chris Goulding picked up a calf injury during warmups, forcing the 381-game veteran out of the crucial decider.

Shea Ili (18 points) and Jo Lual-Acuil (16) kept the home side in the fight but costly turnovers and poor shot selection helped bring its championship defence to an end.

United opened the do-or-die clash with a 9-2 start then scored eight in a row after Tasmania hit the front to edge ahead 25-21 after one quarter.

But the visitors kicked off the second period with a Jarrad Weeks three-pointer then frustrated Melbourne into a series of turnovers before McVeigh’s triple gave Tasmania a 38-34 advantage approaching halftime.

The @HungryJacksAU #NBL22 Grand Final is set. The @SydneyKings and @JackJumpers will battle it out for the Championship 🏆

After being held to nine points for the majority of the quarter, United rallied late with long bombs from Ili and Matthew Dellavedova ensuring the teams went into the main break locked at 40-40.

Adams kept the pressure on the home side as he opened the scoring in the third period then reeled off 10 straight points, including back-to-back triples to extend Tasmania’s lead.

United scrapped its way to an early fourth-quarter lead but Adams ensured the visitors would not be denied, capping a stellar performance with an off-balance three-pointer to put his side ahead 74-68 with one minute to play.

Scott Roth opens up on the emotions around making the Grand Final, and the mental challenges that the season presented early on with the @JackJumpers #NBL22 #NBLFinals pic.twitter.com/ElfVgLfEw9