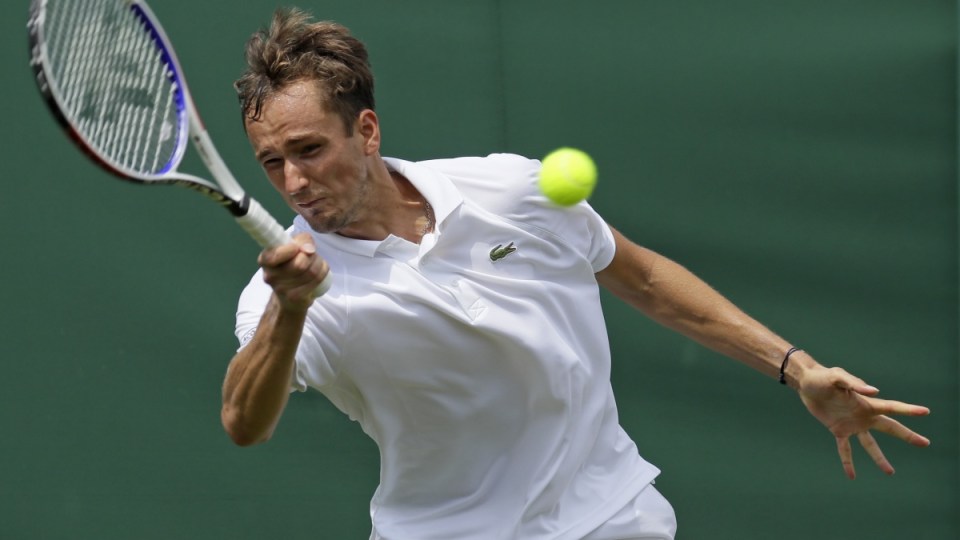 Daniil Medvedev and other Russian and Belarusian players are expected to be barred from Wimbledon. Photo: AP

Russian and Belarusian players will not be allowed to compete at this year’s Wimbledon, according to reports.

Tournament organisers are set to impose the ban due to the invasion of Ukraine.

Players from the two countries have so far been permitted to continue taking part on the ATP and WTA tours but under a neutral flag and with no anthem played.

Men’s world No.2 Daniil Medvedev of Russia and women’s world No.4 Aryna Sabalenka of Belarus will be among those affected by the decision.

Tennis Plays for Peace is a joint initiative across tennis to support the humanitarian relief efforts in Ukraine.

Find out more about #TennisPlaysForPeace ⬇️

Wimbledon is scheduled to run from Monday, June 27 to Sunday, July 10.

According to reports, the All England Club will confirm the ban later on Wednesday.

Wimbledon officials have been in ongoing talks with the UK government regarding the situation, in addition to a number of other bodies, including the Lawn Tennis Association.

UK sports minister Nigel Huddleston previously called for all Russian and Belarusian athletes to prove they are “genuinely neutral” and give assurances they do not support or receive money from Vladimir Putin or the Russian regime.

US Open champion Medvedev reached the fourth round of Wimbledon last year, while Sabalenka was a beaten semi-finalist.

Russian world No.15 Anastasia Pavlyuchenkova and Belarus’ Victoria Azarenka – a two-time Australian Open champion – will also miss out, along with men’s world No.8 Andrey Rublev.

Players from the two countries will still be permitted to enter the French Open, which begins next month.

The Kremlin said on Wednesday that a reported ban on Russian players would hurt the tournament itself given Russia’s tennis prowess and was unacceptable.

“Given that Russia is a strong tennis country the competitions (which take this decision) will suffer from this,” Kremlin spokesperson Dmitry Peskov told reporters on a conference call.

“To make sports people hostages of political intrigue is unacceptable. I hope the players won’t lose their fitness.”