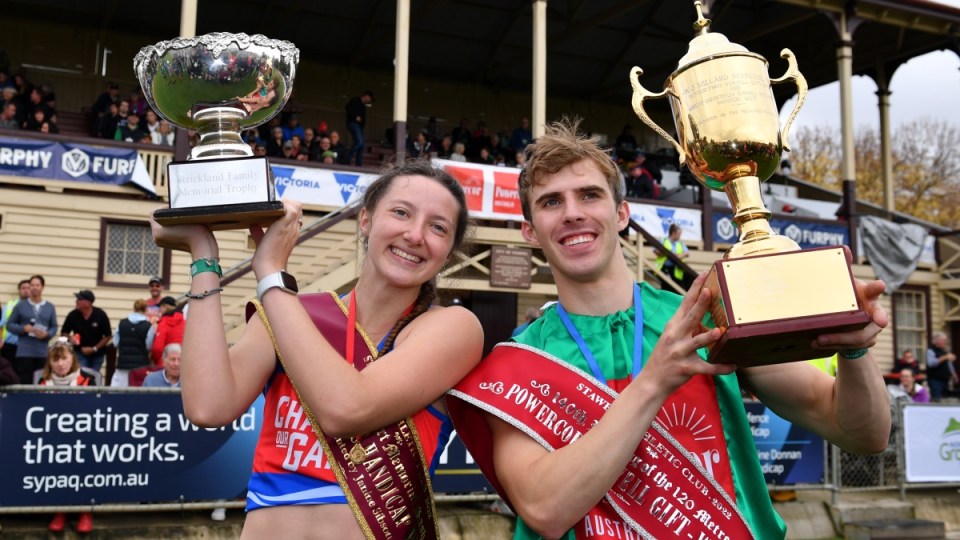 Carla Bull and Harrison Kerr were all smiles after their Stawell Gift triumphs. Photo: AAP

Harrison Kerr has clocked the fastest winning time in 27 years to claim a dominant victory in the Stawell Gift.

The red-hot Victorian justified his pre-race favouritism by dominating the final on a cold Easter Monday at Central Park.

The women’s Stawell Gift was a much closer affair, with Queenslander Carla Bull (6 metres) prevailing in a photo finish in 13.77 from Clare De Salis and backmarker Mia Gross.

He takes home the 2022 title of a mark of 9.25m, writing himself into the history books 👑#PowercorStawellGift #StawellGift #140thAnniversary pic.twitter.com/ZclL79D28a

The 22-year-old Kerr has been a regular fixture at Stawell for the past eight years, but it has only been recently that he has truly believed he was ready to challenge for major honours.

“I’ve had family members compete here and my brother lives locally so I’ve been up and down (to Stawell) a few times,” the final-year engineering student said.

“(Until now) I just wasn’t ready, I wasn’t going to be able to run those sort of times.

“I just needed the right prep to set up for it.”

Tim Halpin leads from gun to tape in the purple to take out the Northern Grampians Shire Council Handicap 800m, winning in 1:51.62 off a mark of 96m! #PowercorStawellGift #StawellGift #140thAnniversary pic.twitter.com/7PGPOvh7wj

That preparation hit a major hurdle in May last year when Kerr injured his shoulder in a suburban Australian Rules football match and was forced to undergo reconstructive surgery.

“I had to have two months off running from that, so I was stuck in the gym doing bikes and core sessions and all the terrible stuff,” he said.

“I knew I had time but I had to do everything right.”

Carla Bull takes out the Change Our Game Women’s Gift off a mark of 6m. How good was that 👑#PowercorStawellGift #StawellGift #140thAnniversary pic.twitter.com/pHUWIXIrvx

The 19-year-old Bull sent a scare through her camp when she picked up a sore throat on the flight from Brisbane to Melbourne on Friday.

“I was a bit worried for the next day,” she said.

“But I just relaxed, made sure I had lots of fluids and did everything I could to prepare.

“I wasn’t too good yesterday, you may have heard my voice.

“But I was a little bit better today which is nice.”

The green of Dion Paul gets the job done in the Stawell Athletic Club Jack Donaldson Handicap 200m, winning off a mark of 16m after clocking 20.88 🔥#PowercorStawellGift #StawellGift #140thAnniversary pic.twitter.com/jUnQmarSjg

After dominating her semi-final, Bull did it much tougher in the final and was initially unsure if she had crossed the finish line first.

“Everyone brings their best to the final,” Bull said.

“That’s all I could think.”

Bull moved from her home town of Hervey Bay to the Gold Coast two years ago to pursue her physiotherapy studies and train under noted sprint coach Brett Robinson.

It’s Georgia Griffith’s AIA Vitality 1000m Invitational! The Olympian comes right over the top of them to win off a mark of 7m.

How special is it to have Australia’s top talent out on Central Park 🌟#PowercorStawellGift #StawellGift #140thAnniversary pic.twitter.com/eYZD8o6mCj

Racing off a mark of 7 metres, Griffith hit the front coming off the final bend.